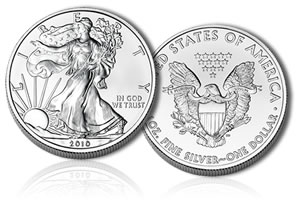 Contemplated by many, speculated by some and recently confirmed by the United States Mint, 2010 is now officially the record holder as the best year ever for American Silver Eagle bullion coins.

The most recent U.S. Mint sales figures as of Thursday place the total number of bullion Silver Eagle coin sales at 28,885,500. That amount exceeds the previous record set just last year by 119,000, a number that will continue to grow as the year still has nearly two full months remaining.

Silver Eagle demand spiked sharply in 2008 during the onset of uncertain economic times. Investors yearning for options turned to the silver bullion coins in record numbers, driving the 2008 total to 19,583,500 which exceeded the previous annual record by over 9 million coins. 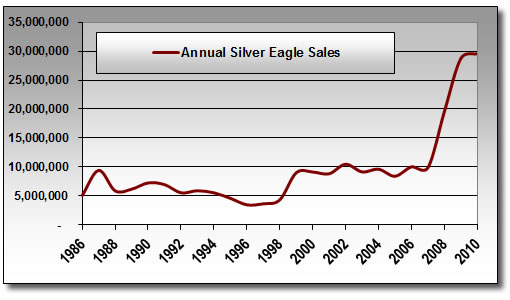 Continued uncertainty in 2009 fueled even more interest in the coins as they plowed through 28,766,500 for the year. Once again, a jump of over 9 million coins was experienced.

These milestones were not without their consequences, however. Despite a legal requiremnet to strike the bullion Silver Eagles to meet public demand, the Mint was unable to entirely comply. On multiple occasions, the Mint suspended their sales and instituted an allocation process which had never before been seen. That limited the number of eagles the Mint’s network of authorized purchasers could receive based on several factors, including their previous order totals and the number of bulion coins currently available.

The Mint was even forced to cancel its collector grade Silver Eagles in 2009 as it struggled to get a handle on the situation. It marked the first time an annual version of the Proof Silver Eagle was not minted since the series debuted in 1986. (They will return Nov. 19.)

At the heart of the problem, according to the Mint, was a lack of blank planchets. The Mint procures the blanks from several sources which were unable to produce them in sufficient numbers to prevent a shortage. The Mint worked with those suppliers to increase the number of available planchets, and in conjunction with a relatively stable demand and the increased production, was able to lift its rationing program in early September 2010.

Investors, however, are still turning to the bullion coins in droves. Strikes ordered by the Mint’s network in October 2010 totaled 3,150,000. The once elusive 3 million mark was initially attained during the first full month in which the coins debuted, December 1986. It then took until March 2009 to reach again. This year, the mark has been topped in January, March, May, June and October.

*Thursday, November 4 is the "as of date" for the bullion eagle numbers.

Too bad these “coins” are unreasonable to spend at face value. I think this is the first time in US history that a dollar coin is being minted that is actually in demand by the public! 😉