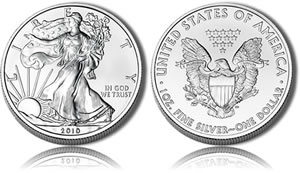 Sales of American Silver Eagle bullion coins surged in October 2010, breaking a string of four straight monthly declines and reaching near an all-time annual high. It was the best October ever for the series which was introduced in 1986.

United States Mint buyers purchased 3.15 million Silver Eagles during the month, topping previous monthly sales in September, from August, and those in July and June. U.S. Mint published sales figure reveal 28,630,500 of the bullion coins were ordered between January and October 2010. That was just 136,000 shy of matching 2009’s yearly annual record. 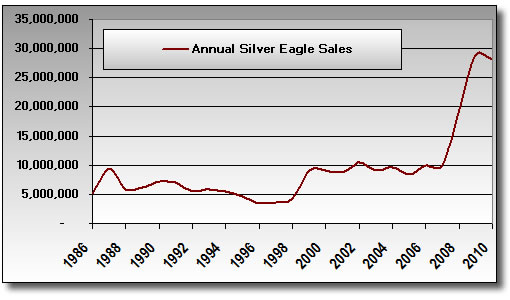 October Silver Eagle sales ranked as the fourth best month in 2010, after a sliding September which ranks at the absolute bottom. The following table highlights this year’s figures:

Prior to 2008, Silver Eagle bullion coins were lucky to approach 1 million in sales during a typical October month. October 2009 had shattered the record when more than double the amount of eagles (2,939,000) were sold than in any previous year during the same month. Now, last month easily comes in first place as compared to the same month from past years. 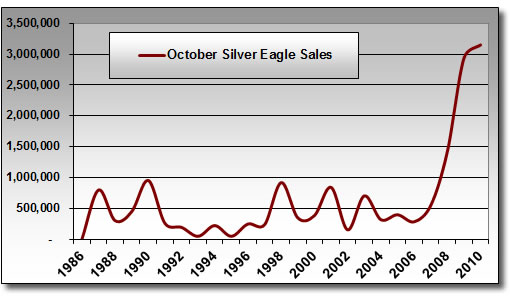 The bullion coins have had and will have more competition. Silver prices are much higher, the Silver Eagle per coin premiums went up from $1.50 to $2.00, and the Mint is releasing the collector proof Silver Eagle Nov. 19.