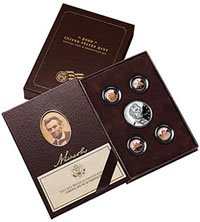 It has been just over eight months since the United States Mint released the Lincoln Coin and Chronicles Set on October 15, 2009 to a ravenous group of buyers.

Initial day ordering was so high that many collectors experienced technical difficulties on the U.S. Mint’s online store and when calling in by phone.

Reports placed sales in the first five hours at almost 30,000 — an amazing number considering the mintage of the sets was capped at 50,000. Fast-forward 25 hours and all of the Mint’s inventory was marked as sold. New orders were entered on a standby "waiting list" to cover cancellations.

While the 30-hour sell-out was longer than some actually predicted, it showed the intense interest collectors and the general public had for the sets… and still do.

In the first three weeks after they were gone, over 1,000 Lincoln Coin and Chronicles Set auctions were seen on eBay. Their closing prices averaged just over $155, but appeared to be settling toward the $130 range — a still sizable profit for sellers who were fortunate enough to pay $55.95 and get them directly from the Mint.

Jump ahead another three months and the decline in auction prices evaporated. Once again, sets were averaging over $150.

But how have the sets been faring lately with eight months having passed since their release?

Quite well in fact. Well over 150 auctions have appeared on eBay during the last 30 days. Average closing prices were still $150, equating to a seller return on investment of over two and a half times the Mint price.

On a positive note for potential buyers, there are occasional deals given patience and timing. Best deal prices in the last thirty days have been as low as $121. There is also an indication that some interested collectors have buying limits. Only a touch over half of the auctions listed on eBay during the time have resulted in a purchase.

This may be the result of two separate factors, however. First, interest in coin collecting is at its lowest during the summer months. Second, a majority of the non sold auctions had starting prices higher than the average selling price — sellers were not interested in letting their sets go without a tidy premium while potential buyers held out for better deals.

The Lincoln Coin and Chronicles Sets contain five unique coins produced by the Mint in 2009 to celebrate the bicentennial of the birth of the sixteenth President of the United States, Abraham Lincoln. The set includes:

All were shipped individually encapsulated in attractive packaging and included a reproduction of the Gettysburg Address, an image of Lincoln and his signature and a Certificate of Authenticity.