Tiger – just the mention of the word evokes a sense of excitement, power and graceful beauty. Therefore, it is not a surprise that the Chinese would include such an animal in their zodiac calendar created millennia ago (that’s right, millennia).

To celebrate the Year of the Tiger, which began today, February 14, 2010, the Royal Canadian Mint has released four new limited minted coins, all of which incorporate the Tiger’s attributes of excitement and beauty:

Each of these silver and gold coins is unique in their own respect, much like all of the animals included on the Chinese Calendar: rat, ox, tiger, rabbit, dragon, snake, horse, goat, monkey, rooster, dog and pig.

But of all these creatures, the tiger is seen as one of the most powerful. Just like the large cat itself, those born in the Year of the Tiger are said to be impulsive and unpredictable with a short temper. However, that does not prevent them from being seen as sensitive and sympathetic as well as extremely generous with their possessions.

The $15 Silver Lunar Lotus Year of the Tiger Coin is actually the first of a new 12-coin series celebrating the Chinese Zodiac Calendar. What makes the series most unique, however, is the scalloped edge which separates them from traditional coinage. 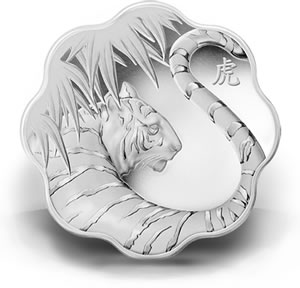 All of the coins in the series are struck from 92.5% silver and 7.5% copper with a face value of $15. The reverse was designed by Three Degrees Creative Group Inc. to include a tiger curled along the bottom of the coin with its tail raised to the top right. The tiger is seen under a canopy of leaves indicative of one of its habitats.

As a bonus offer, the Royal Canadian Mint is offering a free wooden collector case capable of holding all twelve of the zodiac-themed coins to any who subscribe to the entire series. The Mint estimates the value of the case at CAD $199.95.

The $15 Fine Silver Year of the Tiger Coin offers a return to a more traditional shape from the Mint, but this time in fine silver (99.99% pure). 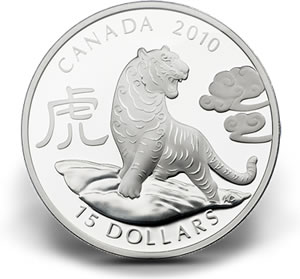 Still with a face value of $15, these coins show the power of the tiger with their obverse design by Aries Chung. A decoratively striped cat is seen with its mouth wide open, almost indicating a roar protruding from it, perhaps as a warning to those who doubt its intentions.

The $150 Fine Gold Year of the Tiger Coin gives collectors a tiger-themed option in gold. 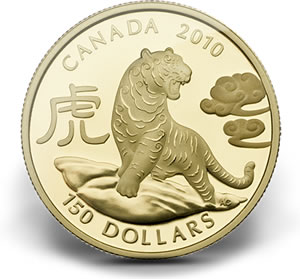 The same tiger image designed by Aries Chung as is used on the Tiger Fine Silver Coin is also featured on this gold version.

The $150 Lunar Hologram Year of the Tiger Coin is the latest Chinese Zodiac hologram coin in a series that started in 2000 with a dragon. 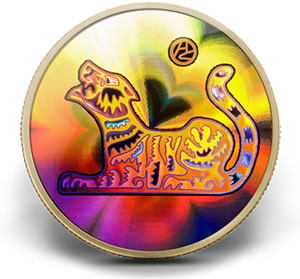 What makes these coins extremely unique is the hologram of a vibrantly colored Tiger. The technique requires the latest state-of-the-art technology which as been perfected by the Mint. Harvey Chan designed the tiger image that sits in a classic position with its head raised.

All of these coins may also be purchased by calling the Royal Canadian Mint’s Customer Solution Center at: