The Perth Mint has unveiled its 2010 Silver Bullion Coin Program. Recognized throughout the world for their superior quality, superb artistry and Government guarantee of weight and purity, these magnificent pure silver coins are welcomed annually by both investors and collectors.

The following described silver coins will be available worldwide through The Perth Mint Web site, or through its authorized distributors and coin dealers:

The Australian Kookaburra Silver Coins were first issued in 1990 and have been featuring a new design of the laughing kookaburra annually since. Indigenous to Australia, these birds produce a call similar to human laughter which can be quite surprising to those not expecting it. 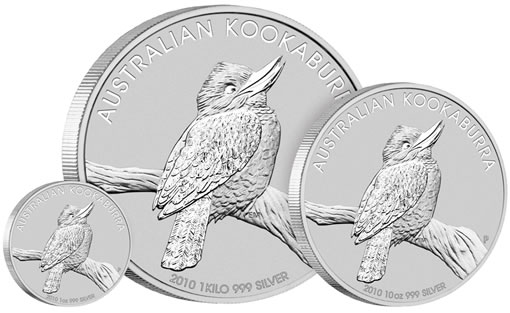 The reverse design features a laughing kookaburra perched on a large branch facing to the right. Over the bird are the words ‘Australian Kookaburra’ while underneath is ‘2010,’ the coins size and ‘999 Silver.’

Surrounding the Ian Rank-Broadley image of Queen Elizabeth II on the obverse is ‘Elizabeth II,’ ‘Australia’ and the denomination of the coin.

Only three sizes are available for the kookaburra silver: 1 kilo, 10 oz and 1 oz. 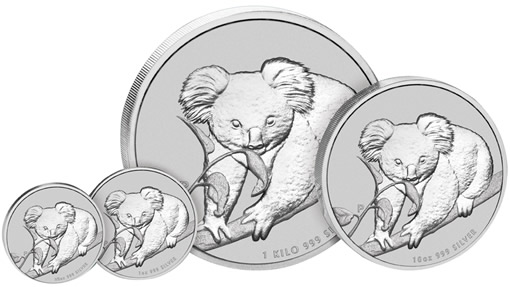 The obverse contains a portrait of Queen Elizabeth II with ‘Elizabeth II,’ ‘Australia,’ ‘2010’ and the denomination surrounding her.

The reverse portrays a koala sitting on a branch eating eucalyptus leaves. Underneath the animal is the size of the coin and ‘999 Silver.’

No mintage limit has been set for any of the Koala Coins which are available in four different sizes.

The Perth Mint offers the 1 oz Koala directly online while the other sizes are available through their distribution and coin dealer network. The 1 oz size is priced at $34.55 AUS or ~$30 US (changes daily based on exchange rates).

Portraying the Year of the Tiger, the Australian Lunar Silver Coin Series for 2010 is available in a staggering seven different sizes. Each year for twelve consecutive years, a different animal from the Chinese Calendar is featured on the reverse of this series of coins.

The silver lunar coins were first introduced in 1999 by The Perth Mint which has since produced twelve different coins utilizing all of the Chinese calendar images. Consequently, the 2010 coin is considered part of the Series II set.

With an image of a sitting tiger on their reverse, the Lunar Silver Coins also contain the inscription ‘Year of the Tiger.’ The other animals on the Chinese calendar to be featured other years are a rat, ox, rabbit, dragon, snake, horse, sheep or goat, monkey, rooster, dog and pig or boar.

With the exception of the 1 kilo and the 1 oz size coins, there is no mintage limit established for this series. The 1 kilo coin will have a maximum of 500 units struck while the 1 oz coins will be limited to 300,000.

The Perth Mint also offers collector proof versions in 1 kilo, 1 oz and a 3-coin set, which includes the 2 oz, 1 oz and 1/2 oz sizes. To order these from around the world, visit The Perth Mint page (and CoinNews affiliate link):

I looking for a 10 oz. and or a kilo silver lunar dragon or snake .
Thanks!
Thomas