Global Metal Agency is taking orders for the largest gold coin in the world, the German based company announced. Named the "Global Liberty" and limited in quantity to only three, the .9999 fine pure gold coin weighs in at exactly 3,333 troy ounces, or 103.6 kg. 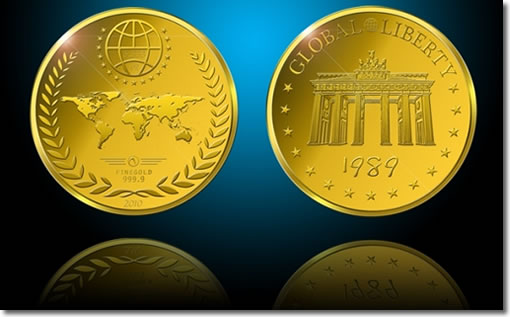 At the current spot price of $1,075 an ounce, the coin has an intrinsic gold value of about $3.6 million US. Global Metal Agency indicates that the Global Liberty is expected to be issued at a price of €2.99 million, which translated at the current exchange rate is approximately $4,086,000 US.

Centered on the obverse ("heads" side) is a two-dimensional world surrounded by a wreath. The depiction is similar to the flag of the United Nations. Inscriptions include the year "2010", "FINEGOLD" and "999.9".

The reverse features the Brandenburg Gate in Berlin and the inscriptions "1989" and "GLOBAL LIBERTY". The gate, which is now a symbol of freedom, is well known to Americans as the place where President Ronald Reagan spoke his historic words on June 12, 1987:

The Brandenburg Gate was a border point between East and West Berlin until Germany’s reunification in 1989. The gate also appears on 10, 20 and 50 cent German euro coins.

The Global Liberty gold coin has a diameter of 50 cm, or about 19.7 inches. As a comparison, this year the United States Mint will begin striking its largest bullion piece, the America the Beautiful Silver Bullion Coin. These are replicas of the new America the Beautiful Quarters series lasting from 2010-2021. The .999 fine silver coins will be 3 inches in diameter — twice that of early US coins like the Morgans and Peace silver dollars.

As another comparison, the world popular American Silver Eagle coin is 1.598 inches in diameter and includes one ounce of silver.

Sorry, but that is not a coin