The People’s Bank of China (PBOC) announced Monday that it would launch gold and silver Panda themed coins on June 30 to celebrate the 30th anniversary of the issuance of its first precious metal commemoratives. 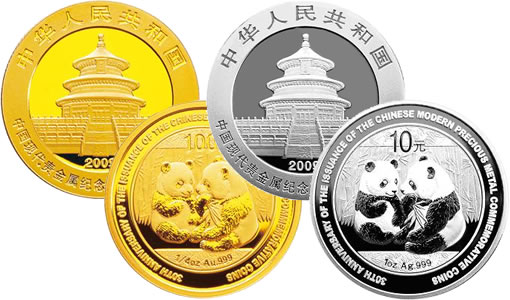 Each new coin’s reverse bears the same Panda design as depicted on the 2009 Gold Panda and 2009 Silver Panda bullion coins. The new commemoratives, however, feature a ring surrounding the pandas with the inscription "30TH ANNIVERSARY OF THE ISSUANCE OF THE CHINESE MODERN PRECIOUS METAL COMMEMORATIVE COINS."

The obverse design of both coins has the traditional image of the Hall of Prayer for Good Harvest in the Temple of Heaven in Beijing.

Panda coins are among the most popular in the world, featuring adorably detailed images of playful pandas that change annually. Although the Chinese precious metal coin program dates back to 1979, the Gold Panda coin design was first introduced in 1982 while the silver version debuted in 1983.

When the Europeans (Portuguese, Dutch and British) started direct trading with the Chinese in the 16th century they had to pay for commodities (silk and spices) and manufactured goods (Chinaware) in gold and silver crowns. With the decline of the US dollar (and every other western currency for that matter) they might just once again be paying in gold and silver for all the great stuff that’s “Made in China”. Deja vu !

How do you buy silver Panda coins for 2011 from the Shanghai Gold coin co? or where do you buy them and how?