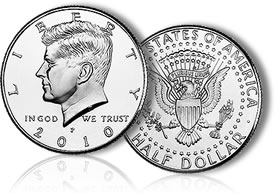 Kennedy 50c pieces are unique in that the US Mint no longer produces them for use in every day change, but instead for collectors in circulation strike condition.

Demand, therefore, is dictated by the quantities of bags and rolls sold directly by the Mint to interested buyers, and not by orders placed from American banks.

In 2008, the Mint struck 1.7 million 2008-D and 1.7 million 2008-P Kennedy Half Dollars. It had to increase production in 2009 as demand rose, helped in part by the focus on the Kennedy family following the passing of Ted Kennedy on August 26, 2009. The mintage levels increased to 1.9 million at each Mint facility.

The 2010 half-dollars are "available in a two-roll set containing 20 circulating quality coins per roll — one each from the United States Mint facilities at Philadelphia and Denver," the Mint notes in a press announcement.  The coins are wrapped in specially designed United States Mint paper coin wrap, which displays a "P" or "D," representing the roll’s mint of origin, and "$10," representing the dollar value of its contents."

The price for each two-roll set is $32.95, plus shipping and handling.

The Kennedy Half-Dollars are also available in quantities of 200 coins within bags marked "with a "P" and "D" representing both mints of origin and the dollar value of $100." An equal amount of Philadelphia and Denver struck coins are in each bag for $130.95.

The offerings are available directly from the Mint, online at:

The half dollar features a 1963 portrait of President John F. Kennedy by Gilroy Roberts. The reverse, or tails side, depicts Frank Gasparro’s heraldic eagle with shield, reminiscent of the presidential seal.

It should be possible to restore the half dollar as a circulating coin of the realm. If fellow collectors could persuade a company like Walmart to distribute them in change. Walmart is a large company with a lot of influence over the market. They could easily persuade vendors to adapt their machines appropriately to accept 50¢ pieces. Has this even been tried I wonder?

If they’re circulation quality they’re copper-nickel. Even 40% silver-clad would sell for about $2.75 to $3.00 each today, so it would be beyond impossible for the mint to sell a roll of 20 for $16.50! And yes, I completely agree about restoring the coin as a circulating denomination. The Mint messed up royally back in the ’60s by not changing the coin’s composition copper-nickel immediately, along with dimes and nickels. When I spend the few halves I can get from a local bank I almost always have to convince people that NO THEY HAVEN’T CONTAINED SILVER SINCE 1971 … but… Read more »