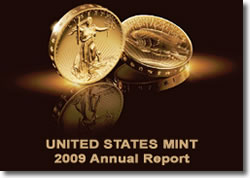 Fiscal year 2009 was filled with bittersweet coin news according to the recently released United States Mint 2009 Annual Report. Even with total sales of the organization responsible for American coinage at a recent high, net income and total seigniorage fell drastically in comparison.

The economic recession is directly responsible for a majority of the newsworthy financial figures that were present in the report. Most notably, the record sales of bullion coins.

"We were able to meet demand for 22-karat gold and silver one-ounce bullion coins by the third quarter of FY 2009. Our West Point facility increased its output by 50 percent from last year, adding one bullion coining press but no additional personnel, while also achieving an improved safety record."

By law, it must strike the gold and silver Eagle bullion coins to meet demand, which takes its toll on the Mint’s other operations, specifically its numismatic offerings.

"Sales of other precious metal numismatic products were significantly hurt by the high demand for bullion," said Moy. "We have worked to stay ahead of bullion demand and hope to resume some American Eagle and American Buffalo numismatic product sales in FY 2010."

Faced with a limited blank planchet availability, the Mint had to completely cancel the production of all of the collectible 2009 Proof and Uncirculated Gold and Silver American Eagles, which are far more profitable to the Mint. (See 2009 Gold & Silver Eagles Canceled.)

As the bullion Eagle’s are meant as low-cost investment option with a government guarantee of weight, content and purity, the coins are sold with a minimal premium placed on them, coming in at just under 2% for FY 2009.

Consequently, even with the record bullion amount sold, little of that fell to the bottom line as profit. 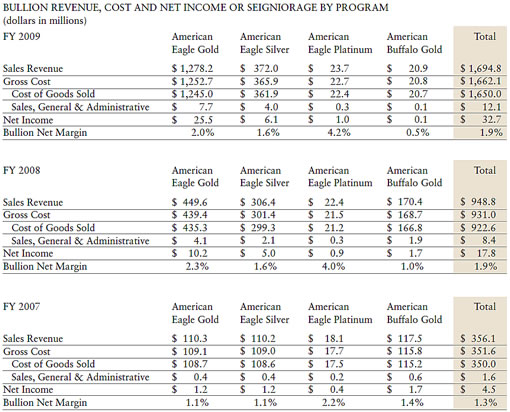 The Mint’s numismatic related sales are broken down into two categories. First, the Numismatic Sale of Circulating Coins in which the Mint sells coins meant for circulation directly to the public instead of through the Federal Reserve Banks. Sales of these coins were down 14.2% to $25.4 million compared to the previous year of $29.6 million. 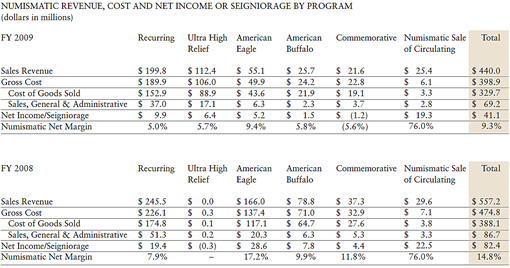 The other, and more commonly referred to numismatic sales are those pertaining to the collectible versions of coins such as the proof and uncirculated mint sets. A 21.4 drop was seen by these bringing their number in at $414.6 million.

With the limited offerings available in FY 2009 due to the collectible Eagle cancellations as well as the Mint’s portfolio slashing in late 2008, it is clear how the net income from this source was severely affected.

Finally, the Mint’s circulating coin production came in at 45-year lows. (See 2009 US Coin Mintages.) With the recession keeping transactional demand down and with John Q. Public raiding the piggy banks at home to pay the bills, the Federal Reserve System has not ordered coinage at typical levels.

Thus seigniorage (the difference between the face value of the coins which is what the Mint charges the Federal Reserve and the actual cost of producing those coins) was way down.

The annual report places total sales of circulating coins at $777.6 million for the year, down a massive 39.9% and equating to only 5.2 billion coins shipped to the Federal Reserve.

In closing out their books, the US Mint transferred $475 million to the Treasury General Fund, marking a defining low for the Mint.

Access to the 2009 and historical Mint annual reports are available at: http://www.usmint.gov/about_the_mint/?action=annual_report.