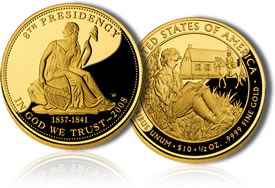 Collectors are taking note of the soon to be gone coins. Weekly sales numbers improved, with the latest US Mint report showing the proof and uncirculated options rising a respective 131 and 68 versus the prior 70 and 37. The following are the latest available figures as of Sunday, Nov. 29.

Currently, the totals are behind 2008 Jackson’s Liberty coins, which were released immediately prior to Van Buren’s Liberty. (2008 Louisa Adams First Spouse coins are the scarcest of the no longer sold US Mint coins. For a sales comparison of current and past offerings, visit First Spouse Gold Sales Figures.)

Martin Van Buren’s wife, Hannah Hoes Van Buren, had been deceased for almost two decades when he was elected as President. As such, the gold coins do not include a portrait of Hannah, but bear an obverse design that appeared on the Liberty Seated Dime between 1837 and 1891, originally executed by United States Mint Engraver Christian Gobrecht. Inscriptions are IN GOD WE TRUST, 2008 and 1837-1841, the years Van Buren served as President.

The reverses or tails side bear an image of a young Van Buren in front of the tavern operated by his family in the town of Kinderhook, New York. The image was created by United States Mint Artistic Infusion Program Master Designer Thomas Cleveland and sculpted by United States Mint Sculptor-Engraver Jim Licaretz. Inscriptions on the reverse are UNITED STATES OF AMERICA, E PLURIBUS UNUM, $10, 1/2 OZ. and .9999 FINE GOLD.