Martin Van Buren’s Liberty First Spouse gold coin and a bronze medal replica are now available from the United States Mint. The 1/2-ounce gold proof and uncirculated versions are priced at $549.95 and $524.95, respectively. Both have a face value of $10, are composed of 24-karat gold, and have an overall mintage limit of 40,000. 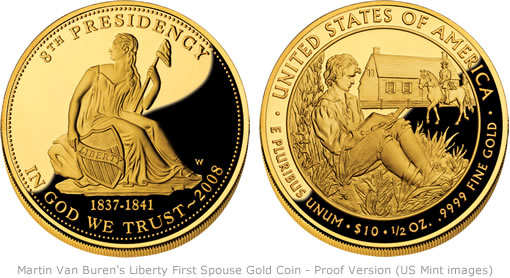 A bronze medal bearing the likeness of Van Buren’s Liberty coin is also available for $3.50.

Martin Van Buren’s wife, Hannah, died in 1819, making him a widower for 18 years when he became president. As a president who served without a spouse, the obverse ("heads" side) design of the first spouse gold coin bears a historical image of Lady Liberty. In this case, a reproduction of the Liberty Seated Dime originally designed by United States Mint Engraver Christian Gobrecht and issued during Van Buren’s presidency.

I am glad to see that the US mint lowered the prices on the first spouse gold coins, as the sales numbers on the current coins from 2008 are way down. The 2007 release got sold out and the 2008 release to date has not even sold half of each coins total max numbers. I think because of the current financial crises the first spouse gold coins from 2008 will be a low population group in the first spouse coin series. I look forward to see population numbers from the US Mint when they come out next to see if… Read more »