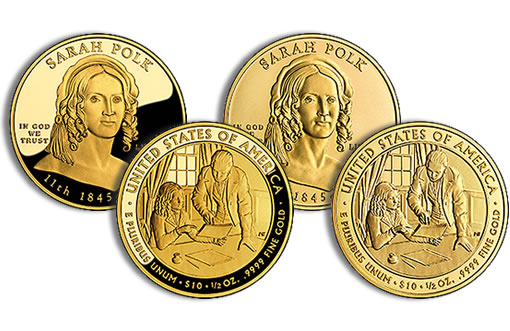 The uncirculated version of the coin is priced at $766 while the proof version goes for $779. The coins will not end with the lowest mintages of the series. The Julia Tyler’s have earned that title to date. But the series itself, which began in 2007 to honor former first ladies, has had extremely low sales and as a result mintages. In that sense, they could eventually be a windfall down the road to collectors who own them.

The following table shows the latest sales figures as of August 29 for the coins since 2009:

The $10 Sarah Polk First Spouse Gold Coins were launched on September 3, 2009. Their upper mintage was set at 40,000 across both options, which obviously will not be met.

Phebe Hemphill designed and sculpted both the obverse and reverse sides of the coin. The obverse features a portrait of Sarah while the reverse shows her sitting at a desk with James Polk at her side working in the White House.

The Mint has already published the 2011 First Spouse designs.