Ottawa, Ontario, – As Canadians start planning for the holiday season, the Royal Canadian Mint has unwrapped its latest collector coins and gift products of 2009. 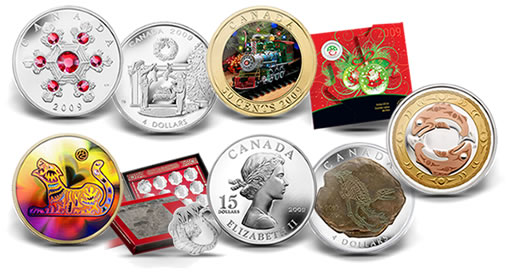 A vivid array of precious and base metal coins await the sophisticated collector or gift-giver with offerings such as:

The public can now purchase these new products, while a new Vancouver 2010 silver collector coin featuring an ultra high relief First Nations-inspired rendition of the sun goes on sale October 7.

"The Royal Canadian Mint is delighted to continue popular themes while introducing attractive new coin designs which celebrate the culture, heritage and values which are the hallmarks of Canada" said Ian E. Bennett, President and CEO of the Royal Canadian Mint. "Canadian collectors and gift givers can benefit from an expanding range of products as the Mint continues to push for new creative horizons."

The following describes the new products being introduced.

Building on the enduring appeal of its innovative Crystal Snowflake series, the Mint is proud to introduce two new pure silver coins depicting snowflakes delicately encrusted with CRYSTALLIZED™ – Swarovski Elements. Available with either blue or pink crystals surrounding a central clear crystal, these sophisticated reproductions of six-sided dendrite ice crystals are the work of Mint Engraver Konrad Wachelko. These magnificent coins have a combined mintage of 15,000 and retail for $94.95 CDN.

Another Canadian tradition graces the Mint’s 2009 holiday-themed pure silver coin. Since the legend of St Nicholas placing three small bags of gold into the stockings of a poor man’s three unwed daughters, the tradition of hanging the stockings on Christmas Eve has earned its place on this finely engraved proof silver coin. This iconic scene, a creation of Ontario artist Tony Bianco, can be found on only 15,000 coins world-wide. Each retails for $42.95 CDN.

The Mint’s newest lenticular coin creates the illusion of a festive toy train moving under a Christmas tree. This visually striking image is showcased on a large brass plated 50-cent coin, whose lenticular application is surrounded by an outer ring with a brilliant uncirculated finish. As an addition to a collection or a stocking stuffer, this charming coin is sure to delight. This new addition to the Mint’s lenticular holiday series is available for $25.95 CDN, while supplies last.

The Holiday Gift Set makes a return in 2009 with a set of uncirculated 2009 coins with a special Canadian-themed Santa 25-cent painted coin. The coins are presented in a card with a maple leaf-shaped die cut to enhance the display of the coins. Available while supplies last, the 2009 Holiday Gift Set is available for $19.95 CDN.

The annual tradition of celebrating the Chinese Lunar Zodiac with gold and silver commemorative coin releases keeps going strong with the Mint’s 2010 tribute to the Year of the Tiger. The 18-Karat Gold Lunar Hologram Coin designed by Canadian artist Harvey Chan is the eleventh coin in the Mint’s hologram lunar series, which began in 2000. It features the Mint’s world-renowned hologram technology and displays the current effigy of Her Majesty against a proof field. With a worldwide mintage of only 4,888, this coin retails for $638.88 CDN.

An exciting new series of sterling silver Chinese Lunar Zodiac coins is born with the arrival of the Year of the Tiger. These coins with a $15 face value have an exquisite scalloped shape which is reminiscent of a lotus flower. Collectors can look forward to the annual release of exotic-looking Lunar Lotus coins over the next 12 years and also have the option to subscribe to the entire series. With a worldwide mintage of 48,888, this coin retails for $88.88 CDN.

The Royal Canadian Mint’s series of ultra-high relief "double effigy" silver coins logically concludes with Canada’s reigning Monarch, Her Majesty Queen Elizabeth II. This design, as well as all others appearing in this series was approved by Her Majesty Queen Elizabeth II. This unique creation marks the first time the Mint has struck a coin bearing two different effigies of the same monarch on the coin’s obverse and reverse. Bearing a $15 denomination, this coin symbolizing the long reign of Queen Elizabeth II is limited to a world-wide mintage of 10,000, and retails for $104.95 CDN.

As this series commemorates Canada’s monarchs through high-relief reproductions of the royal effigies which appeared on Canada’s circulation coinage since 1867, the notable absence from this collection is the effigy of King Edward VIII, who ruled from January 20 to December 11, 1936. It is a little known fact that an effigy which was to appear on all British and Commonwealth coinage had been designed in early 1936, though the tooling required for Canada’s new coinage was not ready by the time Edward VIII abdicated the throne. This "lost effigy" has returned to the spotlight on an ultra-high relief, pure copper medallion available for $19.95 CDN, while supplies last.

The final instalment of the Dinosaur Collection features a legendary Alberta raptor named Dromaeosaurus, otherwise known as the "running lizard". The image of this fierce predator is preserved on a selectively oxidized surface of 99.99% pure silver emulating the rock from which its bones have emerged after a 75 million year slumber. Only 20,000 coins, with a suggested retail price of $42.95 CDN, are available world-wide.

A new selectively gold-plated issue celebrates the annual return of a famous dweller of Canada’s Northwest Coast waters; the Tyee Salmon, meaning "king" to First Nations people, but also known as the Chinook to anglers and gastronomes world-wide. The biggest species of Pacific Salmon is rendered in an elegant design created by West Coast Salish Peoples artist Jody Broomfield. The addition of a pink gold plating to the salmon and a touch of yellow gold to the circle of life surrounding the two Tyee appearing on the reverse of this 99.99% pure silver coin produces a colourful interpretation of the salmon’s role as a "giver of life" to the First Nations people of Canada’s Pacific coastline. Limited to a world-wide mintage of 15,000, this striking new coin retails for $54.95 CDN.

Another creation will soon been added to the Mint’s growing gallery of popular First Nations-inspired coin designs issued in celebration of the Vancouver 2010 Winter Games. The Sun is a 2010-dated limited-edition proof silver dollar struck with a visually stunning ultra-high relief. Available as of October 7, this sterling silver masterpiece is the product of hours of handcrafting and polishing, which gives each coin some minute distinctions. Produced at a low mintage of 5,000 pieces world-wide, this coin will retail for $139.95 CDN.

The Mint’s products are available directly from the Mint at 1-800-267-1871 in Canada, 1-800-268-6468 in the US, or on the Internet at www.mint.ca. The coins are also available at the Royal Canadian Mint’s global network of dealers and distributors.