Ottawa, Ontario – Today, the Royal Canadian Mint launched a string of new products which will once more strike a chord with coin collectors and gift givers looking for unique and finely crafted coins. 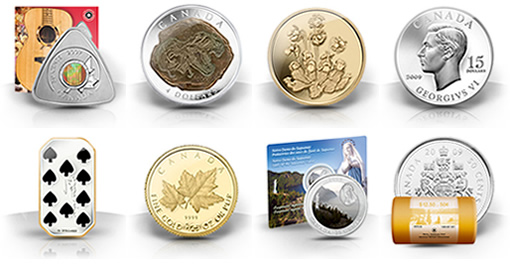 "The Royal Canadian Mint is proud to pay tribute to compelling symbols of Canadian identity which speak to Canada’s heritage, culture and values through collector coins which routinely stand out as among the world’s best," said Ian E. Bennett, President and CEO of the Royal Canadian Mint.

"The newest collector coins of 2009 continue to express the Mint’s passion for quality and innovation which attract coin collectors from across Canada and around the world".

The following are descriptions of the new products being introduced. 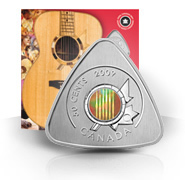 The dreams of Canadian broadcaster Jowi Taylor are reborn in the Mint’s newest triangular 50-cent coin honouring the all-Canadian Six String Nation Guitar. This coin’s intriguing resemblance to a guitar pick makes it an ideal backdrop against which the story of this unique Canadian symbol can be shared and preserved from coast to coast.

Mr. Taylor’s vision took shape in 1995 when he undertook to build an object made from pieces of artefacts collected from all over Canada. He settled on the idea of making a guitar after a chance meeting with luthier George Rizsanyi.

After 10 years of collecting rare objects such as pieces of Maurice Richard’s Stanley Cup Ring, Pierre Trudeau’s canoe paddle and the deck of the Bluenose II, this unique creation made its debut in Ottawa on Canada Day 2006, where it was played by several acclaimed Canadian artists performing at the Parliament Hill celebrations.

The reverse of the nickel-plated steel coin features a hologram insert which vividly depicts the vibrating strings of the Six String Nation Guitar. The coin is enclosed in a folder recounting the intricate tale of one of Canada’s newest national treasures. Limited to a mintage of 30,000, the Six String Nation Guitar coin is available for $34.95 CDN. 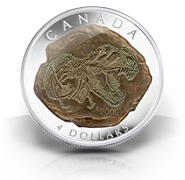 To celebrate Canada’s reputation as a world-class source of dinosaur fossils, the "king" of the dinosaurs is showcased in striking realism on this innovative pure silver coin. 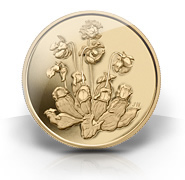 The 12th in a series started in 1998, Newfoundland and Labrador’s official flower, the Pitcher Plant, is the subject of the Mint’s 2009 $350 pure gold coin.

This newest edition to Canadian floral emblems is honoured in the finest numismatic gold coin in the world, made of 99.999% pure gold.

The reverse of this exquisite coin was designed by Newfoundland resident and renowned botanical artist Julie Wilson. Limited to a worldwide mintage of 1,400, this coin retails for $2,149.95 CDN. 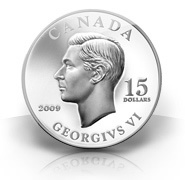 The continuation of the Royal Canadian Mint’s ultra-high relief "double effigy" silver coins features King George VI, Canada’s sovereign from 1936 to 1952. The next and final issue from this five-coin series will showcase Queen Elizabeth II.

This design, as well as all others appearing in this series was approved by Her Majesty Queen Elizabeth II. Bearing a $15 denomination, this visually impressive, frosted effigy is set against a proof field.

These coins were struck four times and hand polished in order to achieve their dramatic appearance. Limited to a world-wide mintage of 10,000, this coin retails for $104.95 CDN. 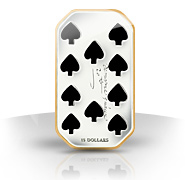 A new card has been cut from the deck as the third issue of the Royal Canadian Mint’s new Playing Card Money silver coin series features the $15 Ten of Spades.

This rectangular-shaped coin evokes an unusual period in early Canadian history when the Governor of New France resolved a shortage of hard currency by seizing all playing cards in the colony and re-issuing all cards bearing his signature as currency.

This unique form of currency is revived in a beautifully painted sterling silver coin designed from artwork preserved by Library and Archives Canada and featuring a selectively gold-plated rim.

Appealing to coin collectors and avid card players alike, only 25,000 of these finely crafted coins are available world-wide, each retailing for $94.95 CDN. 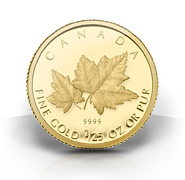 The smallest gold coin ever produced by the Mint is also the most affordable to be purely made of this increasingly precious metal.

For 2009, the 1/25 oz 99.99% pure gold coin is dedicated to the Red Maple, the most abundant and widespread tree in eastern Canada, ranging from southern Newfoundland to south eastern Manitoba. 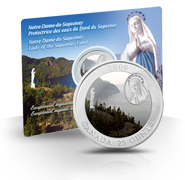 The 10.5-metre, three-ton statue of Notre-Dame-du-Saguenay, designed by Louis Jobin, was erected in 1881 and has since become a regional emblem, watching over sailors and ship’s passengers for more than 125 years.

This coin is available for $14.95 CDN, while supplies last.

Two other popular issues are making their return in 2009: the 25-cent coloured Canada Day coin and the 2009 edition of the 50-cent piece in a commemorative paper wrap roll. 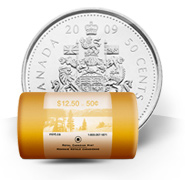 Retailing for $ 14.95 CDN, the Canada Day coin features Churchill the Polar Bear with his loon, beaver and caribou friends in a package including a postcard and magnetic picture frame.

The coins are also available at the Royal Canadian Mint’s global network of dealers and distributors.

i am looking for the olympic coin folders i don’t know where to get them, signed eileen pavitt