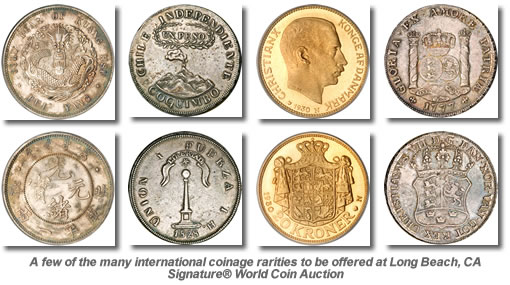 After spending a great amount of time gathering and cataloging these coins it’s very gratifying to see the great auction quality we’ve produced for this event. Even better, there are coins in here for collectors of all types and all levels." 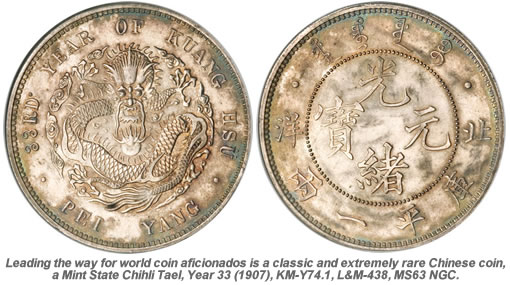 This coin is as sculptural as they come, and carries an appeal equally strong numismatically as it artistically. As a classic and exceedingly uncommon issue of the Chinese late Empire series it is bound to be a hotly contested lot. It carries an estimate of $80,000-$120,000.

"This coin is as attractive as they come," said Tucker. "It’s fully lustrous with a wonderful gold and gray patina along with superbly defined details on the dragon. There are a lot of collectors bound to be very excited by this coin."

One of Latin America’s most intriguing coins, the famous Coquimbo Republic Peso 1828-TH, KM88, WR-10, Eliz-98, XF45 NGC, is certain to generate some serious bidding along with equally serious discussion as the coin presented here is an unquestionably authentic type "A" of this issue, and if you know your world coinage then you know there has long been debate over the authenticity of several examples. 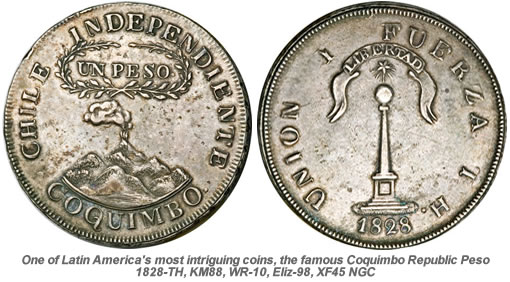 "There are two types recognized of this issue," said Cristiano Bierrenbach, Director of International Sales at Heritage. "Some scholars name them ‘A’ and ‘B’ while others label them ‘Fine’ and ‘Crude’.

While there has been discussions over the originality of type ‘B,’ type ‘A’ specimens are unquestionably authentic and struck in the 1820s as recorded that one of such pieces was donated to the Bank of England in the first half of the 19th century. The coin presented here matches all die characteristics listed by scholars on type." 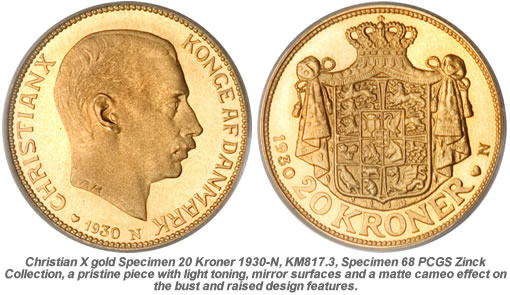 This particular coin, treasured among these very popular issues, is an extremely rare date not originally released for circulation, and was considered uncollectable in Denmark until a few of the rare dates surfaced several years ago. Only one coin has been certified by PCGS and Heritage has not recorded another Specimen. Graded 68, this is to believed to be the finest known example of the date. Estimate: $32,500 – $37,500. 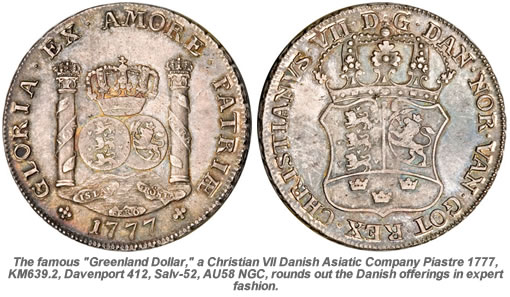 "The Greenland Dollar" is a bit of a misnomer in that this coin was actually struck for trade in the Orient, but includes the Danish island territories on the coin — namely Greenland, Iceland and the Faroe Islands. The design of the coin was inspired by the dominant Asian trade coin, the Spanish colonial pillar 8 Reales; one of 21 known examples of this variety, this is easily one of the most famous coins ever struck. It carries an estimate of $40,000-$50,000. 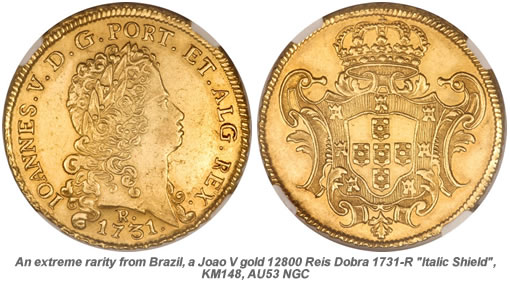 As a short-lived type, the 12800 Reis were struck at the Rio de Janeiro mint from 1727 to 1733. Very late in 1731, the Dobra’s reverse was redesigned to feature a new polygonal shield to substitute the circular (oval) one which had been used only on "R" mint coins up to that year.

This type has been absent from all major Brazilian/Portuguese sales of the last two decades including Norweb and the present example is in nicer condition than the one in the "Espirito Santo Collection," the most important collection ever assembled of Portuguese and Portuguese colonial coins and the only other piece found in our research. It carries a pre-auction estimate of $75,000 – $90,000.

To discuss consigning ancient or world coins to an upcoming Heritage auction, call Cristiano Bierrenbach at 800-872-6467, Ext. 1661, or email him at CrisB@HA.com.

Mike Unser - November 29, 2022 0
The United States Mint is now selling a bronze version of the two Air Force Silver Medals that were issued as a part of...