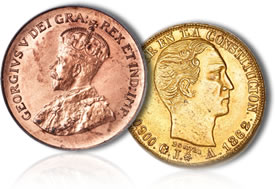 NEW YORK — The single most substantial collection of Canadian Coins ever offered at public auction, accompanied by what is almost certainly the most famous South American coin of all time, will headline Heritage Auctions’ Jan. 3-4 Signature® World Coin Auction, held in conjunction with the New York International Numismatic Convention (NYINC), at the Waldorf Astoria Hotel in New York City.

Bidding will take place live at the auction and online (www.HA.com).

"Our NYINC World Coin Auction is, simply put, going to be a tremendous event," said Warren Tucker, Director of World Coins at Heritage, "and is poised to set many records. It will easily be our largest World Coin auction ever by several million dollars. Add to that our Jan. 12 Non-Floor Session, with more than 2000 lots – a record for world coins – and you’re going to see an unheard of total for a world coin auction."

The main attraction of the Heritage Auctions’ NYINC event is The Canadiana Collection, the finest collection of Canadian coins ever assembled, the sale of which will change the face of the Canadian numismatic market as a host of coins that have not seen the open market in years make their way back into the general coin collecting populace. 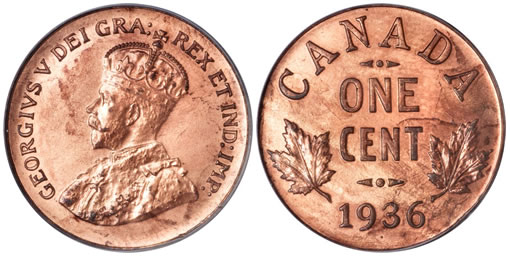 At its previous appearance in the Belzberg Collection, auctioned by Heritage in January 2003, this issue of the 1921 George V 50 Cents "King of Canadian Coins," Ex: Bass-Belzberg-Brown example, was graded MS65 by PCGS and also MS65 by ICCS; it has since been upgraded to MS 66. One of the very scarce survivors of this important issue, this example was certainly well-kept from the time it was acquired and should draw quite a bit of attention from collectors.

Collectors of all numismatic nationalities will most certainly be keeping a close eye on the undeniably unique 1862 Republic gold 50 Francos 1862-GJ, KM-Pn10, AU55 NGC from Ecuador, probably the most important South American coin that exists. 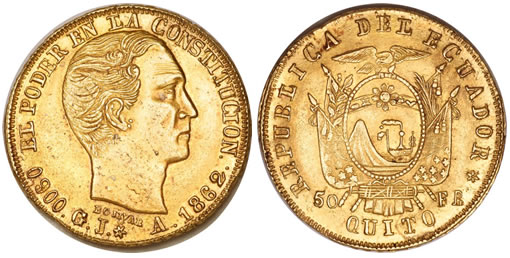 "This coin has been off the market for nearly 40 years," said Cristiano Bierrenbach, Director of International Sales at Heritage Auctions, "and is perhaps the most interesting and desired South American coin in existence. In fact, this unique 50 Francos piece was unknown for almost a century until it was discovered by Robert Friedberg in the 1950s. After its sale at another auction house in 1970 it has been lovingly kept in a single-owner collection and now stands to be the cornerstone of the most advanced world coin collection."

The Exeter College Collection of British Coins, an outstanding group of about 250 silver British coins, most of them in high mint state condition, will offer a major draw to collectors of fine English numismatics, while the reach of the British Empire will also be felt as Heritage auctions The Bombay Collection of Indian Gold Coins, consisting of 78 gold coins from India, including four rare and highly sought after William III Double Mohurs.

Further highlights of the auction include, but are certainly not limited to:

La Rioja Gold 8 Escudos 1842-R, KM14, Friedberg 10, XF40 NGC: A coin of great historical importance, it was struck under the authority of General Juan Manuel de Rosas, leader of the Argentine Confederation. Extremely rare and one of the most historically compelling issues of the Argentine series. Estimated at $55,000-$65,000.

South African Republic gold Pond 1874, Friedberg 1a, KM12, MS64 NGC, fine beard variety: An astounding example of the famed Burgers Pond, portrait of President Thomas François Burgers. 695 were struck in Birmingham, England. Few of this small number have survived, and many extant are damaged from jewelry use; certainly one of the highlights of the entire auction. Estimated at $50,000-$60,000.

A near complete date run of Russian platinum 3 Roubles including proof coins.