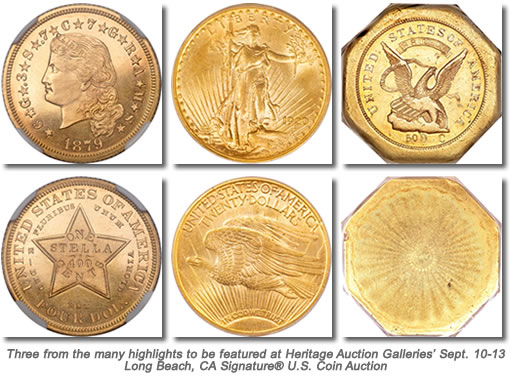 "The various gold stella patterns have been immensely popular with collectors almost since their creation," said Greg Rohan, President of Heritage,

"and the 1879 stella with Flowing Hair portrait, with its relatively higher mintage and relatively greater availability to numismatists, has become the most popular of all. We expect this coin to bring $250,000 or more."

At the PR67 grade level, the 1879 Flowing Hair stella is a condition rarity; in fact, there is only one numerically finer example in NGC’s Census Report. 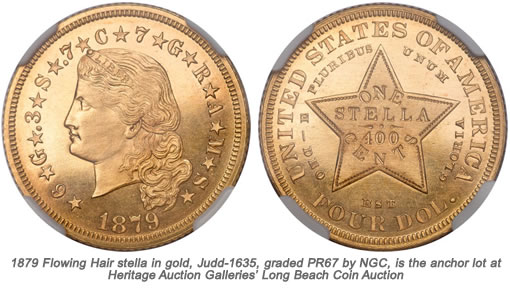 This Superb Gem proof, while not designated as Cameo, nonetheless shows appreciable field-to-device contrast, which contributes to its already considerable eye appeal.

There are a number of other gold highlights in the auction that are sure to catch the attention of collectors. Out of several important later-date Saint-Gaudens double eagles in The Vegas Collection, a 1920-S, graded MS64 by PCGS is the most desirable. 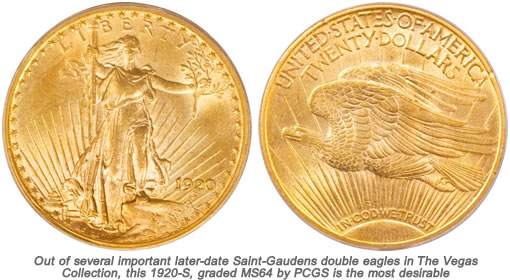 With its low-availability, and a mean certified grade of around AU58, along with its MS64 PCGS grade, the 1920-S is decidedly rare. This particular near-Gem is beautifully sculptural  with a substantially above-average strike.

For connoisseurs of fine territorial gold, a very rare K-1 1851 Humbert $50 Octagonal, Lettered Edge, 880. Thous, 50 on Reverse, graded AU55 by PCGS will most certainly be high on their want list. 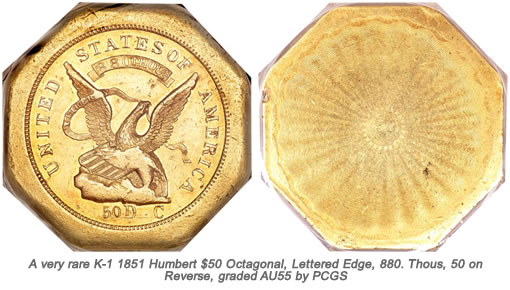 One of just eight examples of the variety certified by PCGS, and believed to be one of fewer than 18 pieces known, this AU55 coin ranks third in the PCGS Population Report, with just two Mint State pieces ahead of it.

The $50 octagonal pieces issued by Augustus Humbert as United States Assayer of Gold 1851-1852, colloquially known as "slugs," are among the most iconic and resonant issues of the California Gold Rush, and this specimen offers an enticing opportunity to any collector who has long been seeking this challenging variant.

"This auction represents an excellent opportunity for smart numismatists to add some important coins to their collections," said Rohan, "as well as to make an investment-grade purchase and move some capital into a safe place."

Additional Long Beach auction highlights include, but are not limited to:

This recent re-discovery adds a new specimen to a tiny pool of available survivors.

A gorgeous example at the highest level of quality available to Registry collectors.

A remarkable coin with a pedigree stretching back to its acquisition directly from the San Francisco Mint, including famous names such as John H. Clapp, Louis E. Eliasberg, Sr., and Dale Friend.