Pobjoy Mint is delighted to announce the release of a new coin from the Isle of Man which commemorates the 20th Anniversary of the Fall of the Berlin Wall, and includes a genuine, authenticated piece of the Berlin Wall itself. 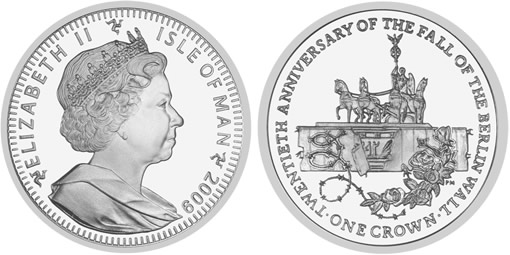 2009 celebrates the Twentieth Anniversary of the Fall of the Berlin Wall and the Isle of Man Treasury has issued a coin to commemorate this historical event.

Between the end of the World War II and the establishment of the two German States, the FRG and the GDR, the base for the division of Germany were laid. Following a period when a large number of people crossed from East Germany to West, the GDR government feared the collapse of East Germany. Their answer was to erect a wall.

The first Berlin Wall was erected in August 1961 and divided the city of Berlin into East Germany and West Germany. Soldiers manned the area, instructed to shoot anyone attempting to cross. Additional chain fences, walls and minefields obstructed the east-west German border. For as many people who successfully crossed the border during this time, there were those who were captured. Many families were divided.

Following years of divide, both physically and also socially, the Wall was taken down in November 1989. The city was once again united and people celebrated. Over the last twenty years, Berlin has been transformed into a vibrant, modern city with liberal views – as the current mayor, Klaus Wowereit describes it, "We are poor, but we are sexy."

Nowadays you have to look quite carefully to find traces of the Berlin Wall in the city. Where parts of the Wall still remain, it has been turned into commemorative pieces of art, a reminder of what was once there but not part of their future. 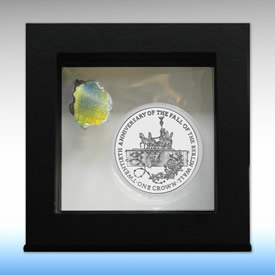 The design of the coin depicts a portion of the Berlin Wall crumbled to reveal part of the Brandenburg Gate showing Quadriga – the chariot and four horses. A piece of barbed wire is shown at the base of the coin transforming into a bouquet of roses to represent peace. The wording "20th Anniversary of the Fall of the Berlin Wall" appears in the surround.

Approved by Buckingham Palace, the obverse of the coin bears a fine effigy of Her Majesty Queen Elizabeth II by Ian Rank-Broadley FRBS FSNAD. The coin is available in Proof Sterling Silver and Uncirculated Cupro Nickel.

Presented in a framed box with clear silicone membrane centre, the precious metal coin sits next to a piece of genuine Berlin Wall and both come with certificates of authenticity.

The beauty of this unique packaging means that both the coin and the wall can be appreciated from both sides. Coins may also be available in Gold sizes and 1oz Palladium – please contact the Mint for details.

Fall of the Berlin Coin Specifications: