Commemorating one of the world’s most memorable events of the late 20th century, the Perth Mint of Australia has created the Fall of the Berlin Wall Silver Proof Coin. 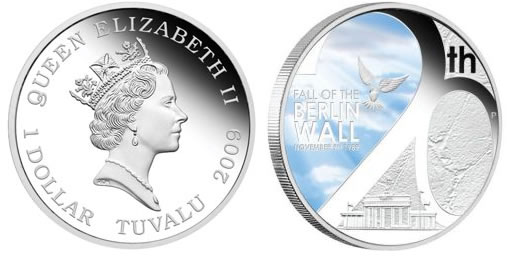 This 99.9% pure silver coin celebrates the 20th anniversary of the fall of the wall that stood for over 28 years separating East and West Berlin, and which symbolized the separation created by the Cold War between the Soviet Union and the United States, and their allies.

History of the Berlin Wall

At the end of the World War II, the defeated nation of Germany was separated into four occupation zones. These zones would then be under the control of the 4 major powers of the allies against Germany. Berlin was also divided in such a manner, even though it resided deeply in the Soviet zone. Original intentions to jointly govern these zones and Berlin soon were met with resistance as tensions between the Soviet Union and the other powers mounted.

The morning of August 13, 1961, Berlin citizens awoke to find units of the East German Army and East Berlin police blockading access between East and West. Shortly, barbed wire fences were put up, and roads and buildings were demolished to insure vehicles did not have easy access between the allies’ western part of Berlin and the rest of the Soviet occupied zone.

Within a few years, a concrete wall was built amplifying the separation. This wall stood until 1989, when visa-free travel was once again allowed between East and West Berlin. This was shortly followed by the reunification of Germany. 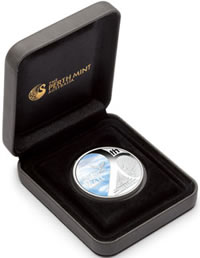 The Fall of the Berlin Wall Coin is limited to a maximum worldwide mintage of 5,000, and will ship in special packaging and accompanied by a numbered certificate of authenticity.

This proof quality coin features an obverse (heads side) containing Raphael Maklouf’s effigy of Queen Elizabeth II and is issued as legal tender from the small Pacific island country of Tuvalu.

The reverse shows a dramatic number "20," which separates a blue shaded image of the sky, complete with a peace dove, and a close-up interpretation of the Berlin Wall. Germany’s symbolic Brandenburg Gate is featured as well as the inscription "FALL OF THE BERLIN WALL NOVEMBER 9TH 1989" and The Perth Mint’s "P" mintmark.

This commemorative coin is available at a current price of AUS $81.36 (US $56.51). It may be ordered through the following Mint page: