History changed forever on the 4th November 2008. Barack Obama became the first African American to become President of the United States of America. 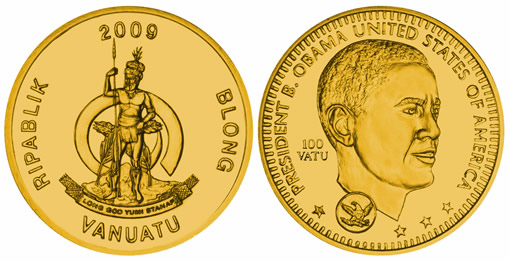 After a long campaign, which started in February 2007, during which his battle for presidency was doubted at some points by his opponent John McCain victory prevailed, inspiring hope in people, not just in America but all over the world. Barack Obama was sworn into office on 20 January 2009.

The Reserve Bank of Vanuatu has captured this moment forever by issuing a commemorative coin celebrating Barack Obama’s Presidential victory.

Vanuatu is an archipelago of islands based in the South Pacific Ocean and it is fitting that they have released a coin featuring Barack Obama as he himself was born on the Pacific Islands of Hawaii. A graduate of Harvard Law School, he was a professor of law at the University of Law in Chicago for many years as a lecturer, at the same time he was also a lawyer for a Chicago Law firm specialising in civil rights as well as launching his political career, which started in 1996 when he was elected to the Illinois Senate.

He resigned from this position in 2004 to focus on his campaign for the US senate. Obama was sworn into the US Senate in January 2005 – he was the fifth African American Senator in US history and the third to have been popularly elected. It is this popularity that has helped him get to the White House – his personable attitude and seemingly normal family life – along with celebrity backing and appearances on huge US shows such as ‘Jay Leno,’ ‘Oprah’ and the ‘Tonight Show’ have helped him appeal to the masses.

Vanuatu is also a Country full of hope – having celebrated 28 years of Independence from France and Britain; when they were know as the Condominium of New Hebrides, they are experiencing an economic upturn thanks to better access via Air, expanding Tourism and a good relationship to Australia.

The design on the reverse of the coin features a portrait of Barack Obama with a cameo of the national symbol of the USA, the Coronet Eagle (based on an American gold coin). The wording above the portrait states President B. Obama United States of America and is broken by four stars. The obverse on the coin features the Vanuatu Coat of Arms and is available in Uncirculated Cupro Nickel, Proof Sterling Silver and Proof Fine 999.9 Gold. To view these coins please visit www.pobjoy.com.