The auction realized a total of $1,510,300 offering close to 3,000 lots of coins and currency from around the world, including lots from Russia, China, Mexico, Cuba, Australia, Latin America, and more. 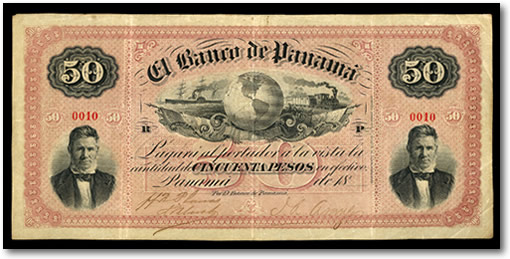 The spotlight was surely on lot 438, PANAMA, Banco de Panama, 50 Pesos, (ND) circa 1869, P-S725, which realized $37,375. Listed as Very Fine with a catalog estimate of $3,000 to $4,000, this lot realized well above that as a result of spirited floor bidding from some enthusiastic collectors. One of a handful of important Panama-related items in the auction, this rare 50 Pesos note with a very low serial number of "0010" is one that few collectors will ever have the opportunity to see.

Clearly one of the most distinct items in the auction was lot 3044, a large Korean wedding ceremonial chatelaine, circa 1800s, with 17 attached strings containing amulets and coins with silk and cloth stringers. 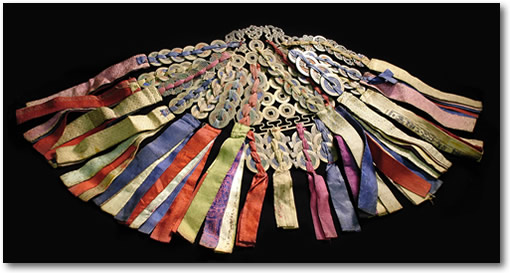 Chatelaines were given to brides on their wedding day, adorned with amulets for protection and coins for good luck. The strings contain 129 pieces total consisting of amulets, 1 Mun coins, 5 Mun coins and 100 Mun coins, some of which are seed coins. The item is very rare and in a very nice state of preservation. Spirited bidding brought well above the $500 to $1,000 catalog estimate, realizing an impressive $23,000 from a Korean buyer who intends to return the chatelaine to its home country.

One of the key collections of the auction, "The J.S. Morgan Collection of Early Russian Banknotes" covered approximately 100 years featuring early 19th to early 20th century banknotes. The collection yielded another impressive highlight at lot 1067, RUSSIA, 100 Rubles, 1882, P-A53, which realized $21,850. Public offerings of this note are few and far between which added to the mystique of this very fine note and helped to better its catalog estimate of $10,000 to $20,000.

"It was an honor to continue our relationship with the Chicago International Coin Fair as the official auctioneer," said Richard Ponterio, executive vice president and founder of Ponterio & Associates.

"We were pleased to offer an extensive selection of coins and currency from around the world, including some standout collections and some very special items that are not often seen at auction, like the Korean chatelaine.

Bidding was very active from multiple countries and it was wonderful to see so many eager collectors participate in the auction and the convention."

Prices realized for all lots in Ponterio & Associates’ Official Auction of the Chicago International Coin Fair are available online at www.bowersandmerena.com. Ponterio & Associates next auction will present world and ancient lots at Bowers and Merena’s Official Auction of the ANA World’s Fair of Money in Los Angeles that will take place August 2-8. Consignments for world lots will be accepted until June 1, and June 19 for U.S. lots. Complete lot viewing and auction schedules are available at www.bowersandmerena.com and catalogs will be available in print and online approximately three to four weeks prior to each auction.

Ponterio & Associates, Inc., was founded in 1982 by renowned specialist in world and ancient numismatics, Richard Ponterio. The company was acquired by Bowers and Merena Auctions in 2008, creating an auction powerhouse that covers the collecting interests of U.S. and international coin and currency enthusiasts. Annual Ponterio auctions include the Official Auction of the Chicago International Coin Fair and the New York International Numismatic Convention.

For more information about Ponterio & Associates’ Official Auction of the Chicago International Coin Fair in April, call 800.458.4646 U.S. and +1 949.253.0916 outside the U.S.  For media inquiries, ask for executive vice president Richard Ponterio. Complete prices realized for all past auctions are available at www.bowersandmerena.com.

I have inherited an 1898 Mexican peso bill from the Banco de Neuvo Leon and am seeking a valuation. Thanks…