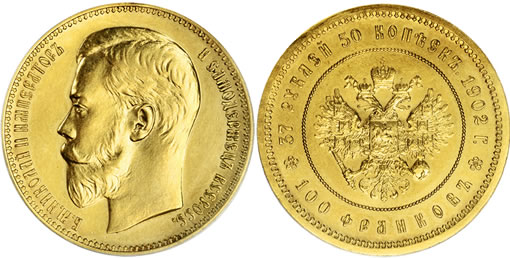 "Bidding activity was very strong in our January 2010 N.Y.I.N.C. Auction," observed Rick Ponterio, executive vice president of Bowers and Merena Auctions, "with many coins and notes selling for noteworthy prices.

Particularly impressive results were achieved through our offering of the Chester Skotak Collection of Central American Coinage as well as in the section of the sale dedicated to Russian, Annamese and Argentine Sun Face coinage."

Additional highlights of the Ponterio & Associates January 2010 N.Y.I.N.C. Auction include:

For a complete list of prices realized for the January 2010 N.Y.I.N.C. Auction, visit the Bowers and Merena/Ponterio & Associates website at www.bowersandmerena.com or call the firm toll free of 800.458.4646.

Ponterio & Associates, Inc., was founded in 1982 by Richard Ponterio, renowned specialist in world and ancient numismatics. The company was acquired by Bowers and Merena Auctions in 2008, creating an auction powerhouse that covers the collecting interests of U.S. and international coin and currency enthusiasts.

Bowers and Merena Auctions was founded in 1983 and has grown to become the world’s preeminent numismatic auctioneer with more than half a billion dollars in rare coin and currency sales. They continue to serve as Official Auctioneer of the Baltimore Coin and Currency Conventions three times every year.

For more information about Bowers and Merena and Ponterio & Associates, or to consign to an upcoming auction, call 800.458.4646 in the U.S. or +1.949.253.0916 international. For media inquiries, ask for executive vice president Rick Ponterio. Complete prices realized for all past auctions are available at www.bowersandmerena.com.