The Perth Mint has issued the first Australian ANZAC $1 coin from a new annual program honouring all men and women who have served their country since the Gallipoli campaign of 1915. 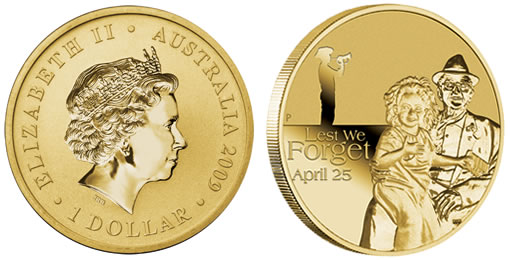 The 2009 release symbolises the importance of remembering the sacrifices of Australian diggers and the preservation of their memories by each succeeding generation with a commemorative design of a former serviceman and a young child.

As well as The Perth Mint’s historic ‘P’ mintmark, the reverse design includes a silhouetted bugler, the words ‘Lest We Forget’ and the date of ANZAC Day – April 25 – on which the lives of all Australians lost in war time are remembered. The coin’s obverse portrays the Ian Rank-Broadley effigy of Her Majesty Queen Elizabeth II.

"Like our previous releases, the 2009 ANZAC $1 coin expresses the extraordinary pride that Australians have in their defence forces," Mr Harbuz said. "With an unrestricted mintage, the new coin provides as many people as possible with the opportunity to acquire an official Australian numismatic tribute." 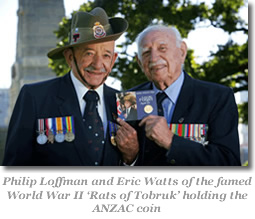 Each subsequent coin in the program will bear a different symbolic design, offering them the chance to build a magnificent collection over time.

The first release is housed in an illustrated presentation card featuring a fold-out stand for upright display. The card depicts a proud young Australian honouring the service of a relative by wearing his medals on the right breast.

Purchasers may also order online at www.perthmint.com.au or check availability with their local coin dealer, including Australia Post.

what is the value of canberra 1999 coin mint