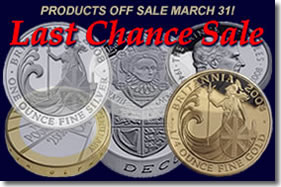 The British Royal Mint is reminding collectors to complete their 2008 UK collections while they still can, as the remainder of the Mint’s 2008-dated coin products will go off sale on March 31.

The Mint’s selection includes more than a dozen coins struck in silver, gold and platinum and in Proof and Brilliant Uncirculated condition.

Each are limited editions with prices ranging from £7.99 to £2,250. Additionally, several of the listed collections have sold most of their mintage totals already, and could sellout prior to the 31st.

Listed in The Royal Mint’s last chance sale are:

I have a number of mint sets from Canada, Australia and United Kingdom. Most are dated in the 1980’s and one is a 1990 Australian mint set. I do not know where to advertise these sets except on eBay. Any suggestions would be greatly appreciated. Thank you.