The British Royal Mint launched brilliant uncirculated 2008 United Kingdom £5 Gold Coins this week and announced that they would have an extremely low mintage of 750. The annual issued coins are struck in 22 carat gold with each measuring an impressive 36.02 millimetres in diameter. 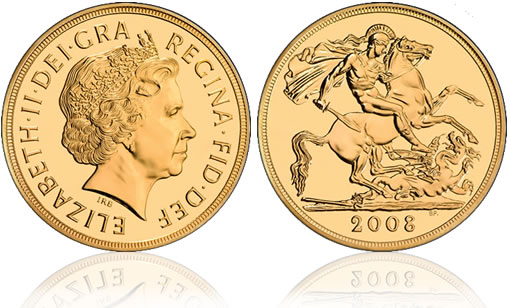 It’s the largest coin of the gold sovereign family and weighs 39.94 grammes and contains 1.1771 ounces of gold, which is five times the amount within a single sovereign.

The obverse of heads side of the coins bears Her Majesty The Queen by Ian Rank-Broadley FRBS. The reverse or tails side depicts Benedetto Pistrucci’s dramatic portrayal of St George and the dragon.

Gold sovereign history and its design

The Royal Mint website includes the following history of the gold sovereign and its design:

The nineteenth-century coinage reform re-introduced the gold sovereign and also saw the origin of what was destined to become one of the most enduring of all numismatic designs – the acclaimed rendering of St George and the dragon by Benedetto Pistrucci – and a subject that has inspired and fascinated artists and sculptors for centuries.

While the new sovereign made its debut in 1817, it was 1820 before the first £5 coin was struck. It was a magnificent coin suitable more as a presentation piece rather than for general circulation and it was not until 1887 that the £5 coins were at last issued to the public. The enormous demand was such that the Chancellor of the Exchequer felt obliged to assure the House of Commons that the Mint would eventually satisfy every request and, in the event, more than 53,000 pieces were struck.

With few exceptions, Pistrucci’s St George has dominated the sovereign family ever since and has been beautifully restored to how it was seen almost 200 years ago especially for this year’s coin. Using a combination of traditional hand-engraving skills and state-of-the-art technology, the result is indeed remarkable, bearing witness to the special care that has been taken over one of the greatest coin designs in world history. 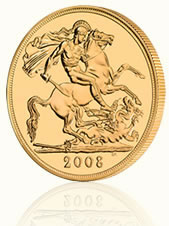 The collections may be ordered online through the Royal Mint product page:

Is the coin real, when will it be open to the public?