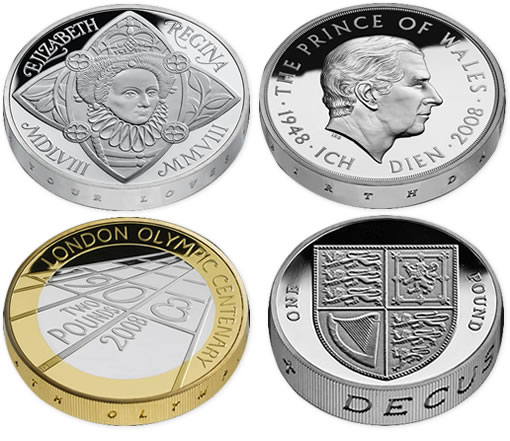 The four coin silver proof collection includes the £1 coin bearing a fresh rendition of the Royal Arms, and this year’s three commemorative coins:

According to the Royal Mint, Piedforts are closely associated with France where they can be traced back to the twelfth century. In England the striking of such pieces began later and was less frequent but medieval examples are known, notably the thick silver pennies of Edward I.

Minting was not a centralised activity in England in the Middle Ages, coins being struck in other locations as well as London. It therefore seems likely that Piedforts were distributed to engravers at these different mints in order to show them what to copy. Making the pieces deliberately thick and heavy ensured they were not mixed unintentionally with ordinary coins.

The Piedfort sytle later became a sort of prestige set. Also according to The Royal Mint,

Thicker than normal coins were produced across Europe during the early modern period, particularly from the mid-sixteenth to the mid-seventeenth century, as part of the broader practice of striking prestige pieces.

At this time the exchange of valuable gifts between rulers and members of their entourage became an established courtly exercise.

Within this context coins struck on thick blanks, together with other types of prestige pieces, were prepared on behalf of kings and noblemen primarily for the purposes of presentation and display.

From Poland to the Spanish Netherlands, from Sweden to northern Italy, coins of this sort provided rulers with a convenien

The coins within the 2008 UK Silver Proof Piedfort Collection are in proof quality, and made from sterling silver. The bi-colour £2 commemorative of the centenary of the Olympic Games has a .999 fine coat or plate of gold along the outer ring.

The collections may be ordered online through the Royal Mint product page: