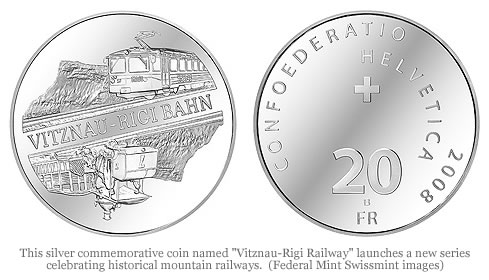 Artist Benno K. Zehnder designed the coin and portrays the cog railway on the Rigi in the form of a playing card. Separated by letters ascending to the right is a modern railway engine and under the "Vitznau-Rigi Railway" heading is a historical steam engine.

"I want to take everybody up onto the mountains so that they can enjoy the magnificence of our grand country!" So said mountain railway pioneer Niklaus Riggenbach in 1863.

This was the year he patented his invention in France allowing the operation of trains on steep gradients using a rack and pinion system.

Six years later, the Grosse Rat (Big Council) of the Canton of Lucerne granted him the concession to construct a cog railway on the Rigi. On 21 May 1871, Niklaus Riggenbach’s birthday, the first mountain railway in Europe was officially opened.

Also according to the Swissmint site, the Vitznau-Rigi Railway was an instant success. In 1992, it merged with its long-time rival, the Arth-Rigi Railway founded in 1875, to form the present-day RIGI BAHNEN AG. It also owns the Weggis-Rigi Kaltbad panoramic aerial cableway opened in 1968.

Railway Coins has been issued in Sweden as well as India and Canada. Now Switzerland! Railroad Coins are very popular so must order soon so it will be gone soon!

CoinNews.net - May 19, 2022 7
Australian bullion sales in April jumped for products struck in silver and slowed for those minted in gold, the latest figures from The Perth Mint...