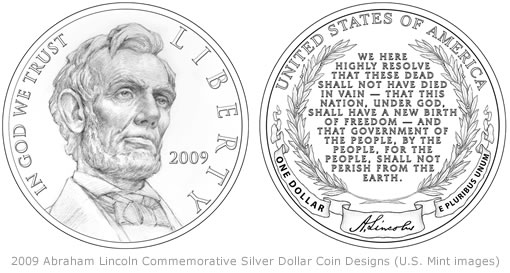 The ceremony occurred on the 145th anniversary of the dedication of Soldiers’ National Cemetery, where Abraham Lincoln delivered his historic Gettysburg Address in 1863 and also where United States Mint Deputy Director Andrew Brunhart unveiled the commemorative Lincoln coin designs to the public.

"It is my great honor to represent the United States Mint on the 145th anniversary of Abraham Lincoln’s Gettysburg Address," Deputy Director Brunhart said.  "It is also my great privilege to introduce the designs for the 2009 Abraham Lincoln Commemorative Silver Dollar to the American people."

The coin’s reverse design by Sculptor-Engraver Phebe Hemphill features a laurel wreath encircling the final 43 words of the Gettysburg Address:  WE HERE HIGHLY RESOLVE THAT THESE DEAD SHALL NOT HAVE DIED IN VAIN – THAT THIS NATION, UNDER GOD, SHALL HAVE A NEW BIRTH OF FREEDOM – AND THAT GOVERNMENT OF THE PEOPLE, BY THE PEOPLE, FOR THE PEOPLE, SHALL NOT PERISH FROM THE EARTH.  Below is Lincoln’s signature.

The obverse, or "heads" side of the coin portrays Lincoln, which the Mint said was inspired by Daniel Chester French’s famous sculpture of the President inside the Lincoln Memorial in Washington, D.C. It was created by United States Mint Artistic Infusion Program Master Designer Justin Kunz and sculpted by United States Mint Sculptor-Engraver Don Everhart.

Please advise what the price and availablity will be on the Lincoln/gettysburg siver dollar will be. Thank you.

Am interested in buying the New Lincoln commerative, how can I pre-purchase

I an interested in purchasing the Lincoln Silver Dollar and also the Lincoln pennies sets, how do I go about it ,please advise
Thank-you

What is the price for the silver dollar and how do I pre-purchase?

I just ordered the silver dollar and can not wait until i get it i have alot of coins but when this one came out i knew i had to have it thank you so much please send it fast ( by pony express if you wish ) HA! HA!
THAT IS THE LINCOLN SILVER DOLLAR!!!!!!!!!!

To all who are inquiring about the Lincoln Commemorative Silver Dollar……. I placed my order with the U.S. Mint, the minute (literally) they went on sale andd was notified of the delay (there’s something new) and when the shipments would begin. On the day the shipments were to begin, I checked my account with the U.S. Mint to retrieve the tracking number. Guess what? My order for the Lincoln Comm. mysteriously dissapeared from my account. I called the Mint and asked why and was informed that an order never existed. This chump Moy (The Director of the Mint) needs a… Read more »

It does not seem to contain the “In God We Trust” insignia on this Silver dollar. Why would that be? I would say unless you are an Athiest, we should refuse this if ever given as change.

Can I still purchase the 2009 Abraham Lincoln Silver Coin? If so, where and for how much?

Sandi, the Lincoln silver coins released to date have sold out. The US Mint will release a special set containing the proof version later this summer, however. For more, check out:

IS THIS COIN GOING TO BE CIRCULATED??????

Here is a page about the Abraham Lincoln silver dollar coin that gives some interesting commentary: