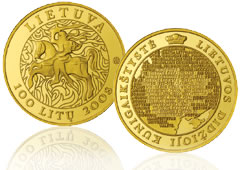 The Bank of Lithuania has issued the second proof gold coin in a series of three to commemorate the millennium anniversary of the first written mention of Lithuania — found in a medieval Prussian manuscript, the Quedlinburg Chronicle, on February 14, 1009.

The 100 Litas 999.9 fine gold coin was designed by Liudas Parulskis and implemented in plaster by Giedrius Paulauskis. Struck and minted en mass at the Lithuanian Mint, it has a diameter of 22.3 millimeters, weighs 7.78 grams and is limited to 10,000 pieces.

The obverse ("heads" side) features the stylized state emblem of Vytis against a background of historic victories and flames of ceaseless renewal. It is surrounded by the inscriptions LIETUVA (Lithuania), 100 LITU (100 Litas), 2008 and mintmark of the Lithuanian Mint.

The edge includes the inscription LIETUVOS VARDO TŪKSTANTMETIS (The Millennium of the Name of Lithuania).

The coins can be obtained at the cash offices of the Bank of Lithuania in Vilnius, Kaunas, and Klaipeda. The price of the coin is LTL 850, or about $317 U.S. See International Currency Converter.

The first coin in the series was released in 2007. The third and final commemorative is scheduled for release in 2009.

Where I can obtain Lithuanian Millennium Anniversary Commemorative Gold Coin? This 100 Litu Gold Coins are sold at Bank of Lithuania for 850 Litu or about $317.00 U.S. ,but they take check and cash only. Any other place selling this commemorative coins?