Twenty years ago in 1989 the Austrian State Mint passed from the Treasury into the ownership of the central bank. The mint was given the freedom to produce and sell products in accordance with the demands of the modern numismatic and investment markets. 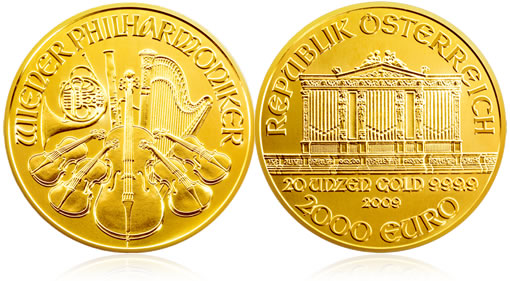 One of the very first innovations introduced by the new CEO, Paul Berger, was the production of a gold bullion coin for investment purposes: the Vienna Philharmonic.

On 16th October this year a limited quantity of 6,027 Vienna Philharmonic coins, each weighing 20 ounces of fine gold, will go on sale in Europe, America and Japan.

Why the odd number? The mint decided to offer 2009 coins (the date of the 20th anniversary) in its three major markets: in Europe, in America and in Japan. Investors still remember the 15 giant coins (each of 1,000 ounces) that celebrated the fifteenth anniversary in 2004, and that entered the Guinness Book of Records as the then largest gold coin in the world. All 15 giant coins were snapped up within days, and the excitement surrounding this special issue of a 20 ounce coin promises a similar market reaction.

The new 20 ounce coin has a diameter of 74 mm and a thickness of 8.3 mm and is housed in a prestigious wooden and red velvet case. Pre-orders for this unique anniversary gold coin have already started pouring into the mint in Vienna. It promises to be a major success as indeed the past 20 years of the Austrian bullion programme have been.

The decision in 1989 to issue a gold bullion coin in the two weights of 1 ounce and ¼ ounce was greeted with indulgent smiles. Austria, a small central European country since the destruction of her empire in 1918 and without any gold mining industry to support, was entering the bullion market, long dominated by the Krugerrand and that time divided between the USA, Canada and Western Australia.

Berger and his team decided that music was the ideal theme for their new coin. Austria was internationally renowned for its music, but they decided against the portrayal of one of the many great composers like Mozart, Haydn or Strauss. That would make the coin appear like a commemorative edition for collectors. Instead they chose a living and world-famous musical institution: the Vienna Philharmonic Orchestra. To their delight the members of the orchestra enthusiastically endorse this choice, freely grant the use of their name. The engraver, Thomas Pesendorfer, designed a collection of instruments to represent the orchestra itself and for the other side of the coin he took the great pipe organ of the Golden Hall in Vienna where the orchestra plays at home. It is seen on television around the world every year on 1st January during the New Year’s Day Concert.

The new Austrian coin was launched in Vienna on 10th October and was an immediate success. The demand in the home market was nothing less than ferocious. In two and a half months 419,000 ounces were sold, achieving with one blow an 18% world market share for the entire year 1989! It rapidly established itself as a serious participant in the international gold market. In 1992 and again in 1995, 1996 and 2000 the Vienna Philharmonic was ranked by the World Gold Council as the top selling gold bullion coin worldwide. In 2008 the Vienna Philharmonic continued to rank No. 1 in Europe and in Japan, and with a year’s market share of 25% it came in 3rd worldwide narrowly missing 2nd place. The “indulgent smiles” have long since disappeared.

A 1/10 ounce in 1991 and a ½ ounce coin in 1994 completed the traditional family of four sizes. In 2008 a silver 1 ounce Vienna Philharmonic was added to the investment range with resounding success.

Looking back on 20 years of continual growth and success, the Vienna Philharmonic has established itself firmly as one of the four great gold bullion coins offered on the international market of today. This one-time issue of a limited number of 20 ounce gold coins is but a fitting tribute to a 20 year long success story that shows no signs of letting up in the near future.

Wow, that coin looks fantastic, one of the best I have seen released this year.