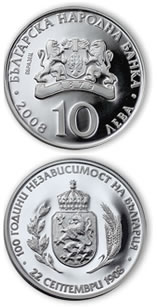 The Bulgarian National Bank (BNB) announced on Monday it had issued a silver coin celebrating the 100th anniversary since the country’s independence proclamation. On September 22, 1908, Bulgaria proclaimed its independence from the Ottoman Empire and became a sovereign kingdom.

The issue is only the second in Bulgarian history to commemorate its independence. The first was in 1912 with the release of two gold coins. The newest commemorative incorporates some of the same design as the older coins.

"Bulgaria has always won and managed to resist outer pressure anytime when its citizens were united in their aims, values and spirit."

The coin was designed by Ivan Todorov. The Bulgarian National Bank provides the following design descriptions:

The obverse [heads side] of the coin features the logo of the Bulgarian National Bank with the year "1879", written on the ribbon. In circumference is the wording "БЪЛГАРСКА НАРОДНА БАНКА" [BULGARIAN NATIONAL BANK], the year of issue "2008" and the nominal value of the coin "10 ЛЕВА" [10 LEVS].

The reverse of the coin features a pattern from a replica of a BGN 20 and BGN 100 coin, issue 1912, commemorating the Proclamation of Bulgaria’s Independence. In circumference in the outer circle there is the wording "100 ГОДИНИ НЕЗАВИСИМОСТ НА БЪЛГАРИЯ" [100 YEARS OF INDEPENDENCE OF BULGARIA] and the date "22 СЕПТЕМВРИ 1908" [22 SEPTEMBER 1908] below.

Where I can buy this 100 Anniversary of independence of Bulgaria Commemorative Coins? And what coin dealers or distributor sell Bulgarian Coins?