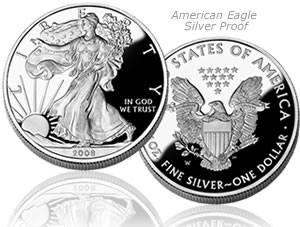 The U.S. Mint’s 2008 Gift Catalog announcement on Monday contained a glaring omission. There were no collector 2008-W American Eagle Silver proof coins. Did the Mint simply forget to list these mainstay one-ounce silver coins? Not likely.

The die is cast and this year’s run of the coins is likely ended. Despite hope, collectors are not likely to see a 2008 comeback similar to the platinum eagles’ return on Friday. Three factors reinforce this line of reasoning:

The first reason is self-evident, the second a matter of fact and the third bluntly explained by the Mint earlier this year.

“We are not using incoming supplies of silver blanks to produce numismatic versions of these coins (American Eagle Silver Proof and Uncirculated Coins); all incoming inventory is being used solely for silver bullion coins.”

Then the Mint said it was "making every effort to increase its acquisition of silver bullion blanks." The effort was apparently unsuccessful because, again, several months have past and the Mint has not resumed sales.

The Mint sold some 715,500 of the 2008-W coins for $31.95 each before the unprecedented and unexpected production shutdown. Acquiring proof eagles now is more costly with prices on the secondary market about 70 percent higher than initial buy prices. As a reference, refer to auction sites like eBay where they are listed for around $55.

Yes, the volatile bullion market has thrown unexpected curve balls at the Mint this year. Nevertheless, it will be a shame if the Mint strikes out with collectors who have always chosen to buy certain coins at year’s end and specifically for holiday gifts — just as past Mint holiday catalogs have promoted the eagles for years. Further, if they do not return, it would be especially upsetting because there was no pre-warning that their production would be halted in August.

Collector uncirculated 2008-W American Eagles are still on the Mint’s website for $25.95 each. These were missing from the Mint’s catalog announcement as well, raising questions as to how long they may be available.

My husband and I have been giving the proof American Eagle coins to our children every Christmas (10 coins) since they first came on the market in 1986. Every day, I have logged on to the Mint site to find out when the 2008 coins would again be released. Thanks to your article, we now know why these are not available. We are totally disapointed with the way the Mint has handled this situation. The only recourse now is to sign up for all future coins in the collection, but that does nothing for 2008. Thank you again for your… Read more »