Next Thursday, Jan. 3, the 2008 American Eagle Silver Proof Coin will go on sale by the United States Mint. While the 2007 proof version is currently sold for $29.95, its days are numbered and the Mint has announced its newer replacement will sale for $2 more, at $31.95. 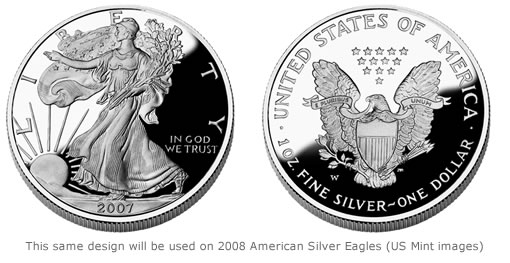 The silver eagle proof coin contains a full ounce of 99.9 percent silver. It also bears the “W” mint mark denoting its mintage at the United States Mint at West Point.

While the Mint currently has no 2008 image for the new proof coin, its exactly like the 2007 version with the exception of the date.