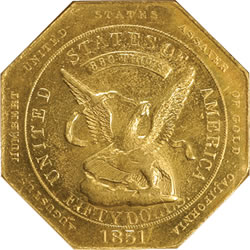 The spotlight of the auction was on the new discovery 1851 Augustus Humbert $50 Gold piece of the Reeded Edge, 880 THOUS (K-5, Rarity-5) variety graded MS-65 * by NGC that realized $460,000 after an excited round of bidding. Prior to the auction, NGC chairman Mark Salzburg called it "the most memorable coin I have graded all year."

"A new discovery piece the caliber of this Humbert is so special and rare that I can think of only a very few in this league that I have come across in my 40-year span in the business," said Steve Deeds, president.

"It is very exciting to be able to present a coin like this to the world of collectors who will appreciate it for its history and value to the numismatic community. This is a showcase piece for its new owner and one that will be remembered for years to come."

Also at the top of the list is an impressive near-Mint preservation 1859-O Liberty Double Eagle, Winter Variety One, the only known dies, from the Centennial Collection and graded AU-58 by NGC that realized $97,750. The 1859-O is a leading rarity in the New Orleans Mint Double Eagle series. A mere 75-85 pieces are believed extant in all grades – a total that confirms the 1859-O as rarer than all other O-mint coins of this denomination with the exception of the 1854-O, 1855-O, and 1856-O. The ‘59-O is equally as elusive as the lower-mintage ‘79-O of the Type III design.

Following close behind the 1859-O is an 1854 Liberty Double Eagle, Large Date in NGC MS-64, also from the Centennial Collection, that realized $96,600. An elusive variety in all grades, this extraordinary representative is among the finest known with a combined PCGS and NGC Population of just 3, and none are finer at either service.

Also notable is a 1928 Hawaiian Sesquicentennial, Proof-65 (NGC), which realized $86,250. This coin is listed as the No. 8 specimen in the Breen/Swiatek reference, which means that it was initially presented to Juliette May Fraser, a native of Honolulu who is credited with sketching the design for the Hawaiian Commemorative Half Dollar. In addition to the impressive pedigree, the coin was accompanied by numerous supporting items and documents that further enhanced its importance.

Prices realized for all lots in the Bowers and Merena Beverly Hills Rarities Sale are available online at www.bowersandmerena.com.

Bowers and Merena’s next auction will be held October 27-28 in New York City with simulcast auction rooms in Hong Kong and Germany, featuring two premier collections of Chinese, Russian and World banknotes, "The East Bay Collection of International Banknotes" and "The Eduard Kann Chinese Banknote Collection." The auction will be spearheaded by Bowers and Merena in conjunction with sister companies John Bull Auctions, Ltd., of Hong Kong, and Heinrich Köhler Auktionshaus of Germany. Complete lot viewing and auction schedules are available at www.bowersandmerena.com and catalogs will be available in print and online by early October.

Bowers and Merena Auctions was founded in 1983 and has grown to become the-world’s preeminent numismatic auctioneer with more than half a billion dollars in rare coin and currency sales. They have been awarded the prestigious honor of Official Auctioneer for the 2009 American Numismatic Association Conventions in Portland and Los Angeles, in addition to their continued service as Official Auctioneer of the Baltimore Coin and Currency Conventions three times every year. Bowers and Merena has handled four of the five most valuable United States coin collections ever sold, including the Louis E. Eliasberg Sr. Collection, the Harry W. Bass Jr. Collection, the Garrett Collection for The Johns Hopkins University, and the Norweb Collection.

For more information about Bowers and Merena Auctions and the Beverly Hills Rarities Sale, call 800.458.4646. For media inquiries, ask for president Steve Deeds. Complete prices realized for all past auctions are available at www.bowersandmerena.com .