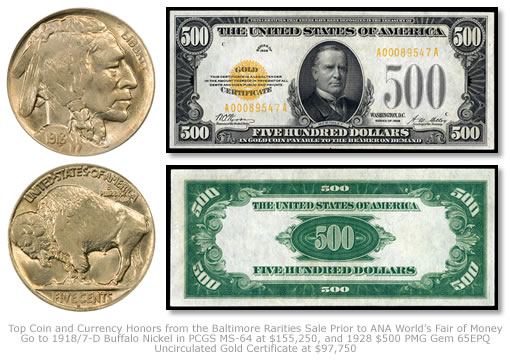 IRVINE, Calif. – Bowers and Merena Auctions, America’s leading rare coin auction house, hosted their Baltimore Rarities Sale on July 26, 2008, at the Baltimore Marriott Waterfront, just prior to the ANA World’s Fair of Money. The auction presented approximately 1,100 coin and 200 currency lots and realized a total of $4,427,243.

Described as "a really a nice coin" and a rarer die pairing of this historically significant and extremely popular federal gold issue, it is one of only four in the NGC Census, and a mere two finer with a PL designation as part of the grade. Also notable was Lot 1014, a 1796 Capped Bust Right Quarter Eagle, BD-2, HBCC-3002, Rarity-4, No Stars in NGC AU-53 that realized $109,250.

Currency was also in the spotlight, with Lot 164, Fr. 2407, 1928 $500 Gold Certificate, PMG Gem Uncirculated 65EPQ realizing a very impressive $97,750. Truly Uncirculated $500 1928 Gold Certificates are rare, with only three of this number certified at the "65" level, and only a single example has ever earned a certification any higher from PMG, making this specimen an extremely scarce item in a superior grade attested to by PMG.

"Our Baltimore Rarities Sale came right on the heels of our Official Baltimore auction in June, which brings our total for the past two months to almost $10.7 million," said Steve Deeds, president of Bowers and Merena.

"Both auctions were very active and both conventions have been busy and productive, as well, and I’m happy to see such prosperity and enthusiasm within the industry."

The Collector’s Choice Auction will be conducted on the Bowers and Merena website September 8-17, with lot viewing by appointment at their Irvine headquarters. Catalogs will be available by late August, and interested bidders are invited to visit www.bowersandmerena.com for complete auction and lot viewing schedules, or call 800.458.4646 to speak to a representative.

For more information about Bowers and Merena and the Baltimore Rarities Sale or future auctions, call 800.458.4646.  For media inquiries, ask for president Steve Deeds.  Complete prices realized for all past auctions are available at www.bowersandmerena.com.