IRVINE, Calif. — Bowers and Merena, America’s premier rare coin and currency auction house, kicked off what promises to be an exciting year with its January 2010 Orlando Rarities Sale. 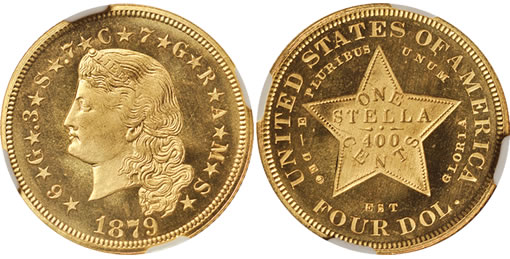 The sale, with nearly 1,000 lots of rare and enticing United States, Colonial and Territorial gold coinage, was conducted in a single session on January 5. Total prices realized for the auction is in excess of $2.5 million.

"We had a strong turnout among bidders in our Orlando Rarities Sale," stated Bowers and Merena president Steve Deeds, "and prices realized for many lots reflected collectors’ interests in rare, difficult-to-find coins in premium-quality condition.

Said Deeds: "United States gold coins were not the only strong performers in our Orlando Rarities Sale. Early Copper specialists made their voices heard by driving the realized price for lot 27 to an impressive total of $25,300. The coin in that lot is a fresh, new-to-market example of the rare S-264 Large Date, Small Fraction variety of the 1803 Draped Bust Cent. We sold the coin as a PCGS VG-10."

"And in the Territorial gold section of our Orlando Rarities Sale we were pleased to present lot 695," observed Deeds. "A unique variety of the 1851 K-2 Augustus Humbert $50 Gold, this PCGS-certified AU-55 is missing the digits 88 in the inscription 880 THOUS on the obverse scroll. We saw particularly fierce competition between two interested bidders, and when the dust settled the winner earned the right to take this important coin home at $115,000."

Additional highlights from the Orlando Rarities Sale include:

For a complete list of prices realized for the January 2010 Orlando Rarities Sale, visit the Bowers and Merena website at www.bowersandmerena.com or call the firm toll free of 800-458-4646.

Bowers and Merena Auctions was founded in 1983 and has grown to become the world’s preeminent numismatic auctioneer with more than half a billion dollars in rare coin and currency sales. They continue to serve as Official Auctioneer of the Whitman Coin & Collectibles Baltimore Expos three times every year. Bowers and Merena has handled four of the five most valuable United States coin collections ever sold, including the Louis E. Eliasberg Sr. Collection, the Harry W. Bass Jr. Collection, the Garrett Collection for The Johns Hopkins University and the Norweb Collection.

For more information about Bowers and Merena and Ponterio & Associates, or to consign to an upcoming auction, call 800-458-4646. For media inquiries, ask for President Steve Deeds or Executive Vice President Rick Ponterio. Complete prices realized for all past auctions are available at www.bowersandmerena.com.