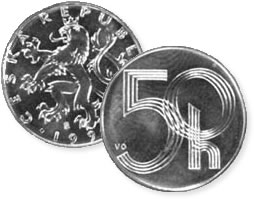 Coin collectors will be the only people to appreciate the Czech 50-heller coin after Sunday, August 31. The Czech National Bank (CNB) has announced that their country’s smallest denominated coin will no longer be legal tender starting in September.

"The main reason for this decision is that 50-heller coins are ceasing to fulfill their function as circulating currency," said Pavel Rezabek, Chief Executive Director and Member of the CNB Bank Board.

Rezabek has said there are a total of 410 million 50-heller coins currently in circulation. With a population of 10.3 million people, every man, woman and child could have 41 coins.

Yet, no one likes to use the coins in daily transactions. Only a reported 10% make their way back to the central bank.

The Czech Republic is experienced in eliminating smaller denominated coins, having pulled the 10-heller and 20-heller coins as legal tender in 2003. And like other countries who have tossed their smallest coin to history, inflation and other feared consequences have not been a factor.

"As previously, it will still be possible to state prices of goods and services in hellers and multiples thereof. The current practice will remain unchanged and only the final sums for cash payments will be rounded to whole korunas.

Thus, the impact on inflation will be hardly visible, as was the case when the 10-heller and 20-heller coins ceased to be legal tender," added Pavel Rezabek

"We also believe that the public will welcome that fact that the contents of their wallets will become easier to deal with when these infrequently used coins disappear."

Mike Unser - January 28, 2022 2
United States Mint images along with a few collector products and circulation release dates have been published for the 2022 American Women quarter dollars....