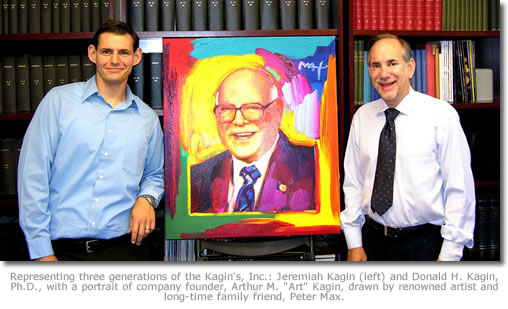 A lucky visitor to the Kagin’s booth (#531) will be awarded a free half-ounce American Eagle platinum coin valued at over $1,300 in a random drawing, and all visitors can enjoy a slice from a huge anniversary cake while it lasts.

"This is our platinum anniversary, so it’s appropriate we give away a platinum coin to celebrate," said Donald H. Kagin, Ph.D., son of the founder and a well-known numismatic researcher and dealer of pioneer gold and U. S. paper currency.

Kagin, the first to receive both a Bachelor of Arts and Doctorate degree in numismatics has managed the company since 1988.

"At 75 years, I believe we are the second oldest family-owned rare coin dealership in the United States.  The tradition continues with my sister, Judy, who can be seen at major currency shows, and my nephew, Jeremiah, who is taking an active role with the company," said Kagin.

"Throughout the years, numismatics has not been just a business to us, but rather a passion and a way of life.  We don’t just build collections, we build relationships." 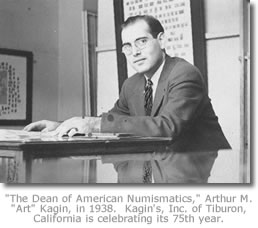 Company founder Art Kagin, widely known as the "Dean of American Numismatics," passed away in 2005.  He started collecting as a youth while selling newspapers and magazines when a woman gave him an 1883 "No Cents" Liberty Head nickel.

At the age of 13 he began working part-time selling coins, stamps and paper money in Minneapolis, Minnesota.

Later he worked for over 30 years with his brother, Paul, buying and selling coins nationally through auctions from Des Moines, Iowa.  At one point they had five offices in the Midwest including one in Omaha managed by another brother, Julius.

"Dad cataloged more auctions than anyone else, almost 350," said Kagin.

As a national goodwill ambassador for the hobby for decades, Art Kagin frequently emphasized, "Numismatics is like a marriage.  It has to be shared to be enjoyed."

He organized and developed the first numismatic college courses in the nation at Roosevelt University in Chicago, and he and Don started the Foundation for Numismatic Education that continues to fund numismatic research projects.

The family’s philosophy of promoting numismatic education continues with Don teaching and lecturing at schools, service organizations and ANA Summer Seminar programs.  His innovative, one-man shows, "The Oldest Living Pioneer" and "Colonial Man," have educated, entertained and delighted thousands of collectors and non-collectors around the country.

Both Art and Don served on the ANA Board of Governors and as Chairman of the Education Committee.

Under Don’s management, Kagin’s moved its headquarters in the 1980’s to Tiburon, California, just North of San Francisco.  In 2006, the company acquired Holabird Americana of Reno, Nevada, managed by well-known geologist and Western Americana expert and researcher, Fred Holabird.

Numismatist Donald H. Kagin has unique credentials as a numismatic authority. He earned the first Bachelor of Arts degree in Numismatics granted by Northwestern University, simultaneously earning another B.A. in history. Graduate and post-graduate studies at Northwestern, Drake University, John Hopkins University, the American Numismatic Society Museum, the Smithsonian Institution, and the Union Graduate School earned Don the first Doctorate in Numismatics ever granted in the United States.

Dr. Kagin’s fields of expertise are private gold coins and United States currency. He authored the most comprehensive book on the former, Private Gold Coins and Patterns of the United States, which won the Numismatic Literary Guild’s “Best Book of the Year” award. He has also authored the most comprehensive book on rare coin investing, Donald Kagin’s Personal Guide to Rare Coin Investments, which was awarded the “Best Investment Book” by the Numismatic Literary Guild.