To conclude its six-coin series "Austrian Railways" the Vienna mint is now issuing a 20-Euro silver commemorative coin dedicated to the "Railway of the Future." 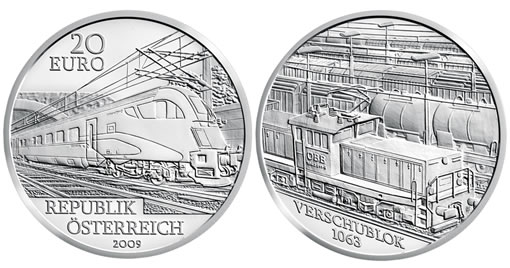 In the little over 150 years of its existence the railway has revolutionised the transportation and through it, the economies of the world and the life styles of its peoples. Neither the spectacular developments in motor road transport or in flying have detracted from the railways pivotal position in the modern world of travel. In passenger travel the watchwords of the future are speed and comfort.

The "Bullet Train" (Shinkansen) in Japan and the TGV (Train à Grande Vitesse) in France blazed the way for high speed rail travel in the last decades of the 20th century with average speeds of between 200 and 300 km/h, reaching in tests even to speeds between 450 and 575 km/h.

The Austrian high speed locomotive is the "Taurus". The first generation "Taurus 1016" went into service in the year 2000; the third generation in 2007. It reached speeds of 375 km/h — the main restraint being the lack of high speed lines available in Austria to accommodate such trains.

The latest addition is the high speed train "railjet" which has gone into service on Austria’s railways in 2009. It is a 185.5 meter long train drawn by a Taurus-2 locomotive at speeds between 200 and 230 km/h. (Its test record at present stands at 275 km/h.) The railjet can transport over 400 passengers: for example, 16 in the Premium class, 76 in First class and 316 in the Economy class. It is, therefore, comparable with the high speed AVE (Alta Velocidad Espanola)in Spain and the Eurostar between London and Paris or Brussels.

Another important aspect is the renovation and modernisation of Austria’s major railway stations which either still date from the old Monarchy or from the reconstruction after World War II in the 50’s. The biggest project is in Vienna itself, where in the days of the Empire there had been several railway stations around the city serving individual lines and railway companies.

Today three of these (the West Railway Station, the South Railway Station and the Franz Josef Railway Station) are still in service. A new grand central station is planned next to the site of the South Station to replace the old diverse terminals. It is planned to be fully operational by 2015, handling an average of 5,000 passengers per day.

The new 20 Euro silver coin shows on the obverse the railjet speeding out of a low tunnel. The reverse side shows a freight yard with heavily loaded cars, tanks and containers. An electric shunting locomotive is to be seen in the foreground. This design reminds us of another important policy for future development – the shifting of goods transport from the roads on to the rails. For a landlocked country like Austria with massive transit traffic, this measure is of vital importance to its environment and to the quality of life for its citizens.

The new coin is struck in proof quality only with a maximum mintage of 50,000 pieces. Each coin comes in an attractive box with a numbered certificate of authenticity. A prestigious wooden case for the now completed series of six railway coins can be purchased separately.