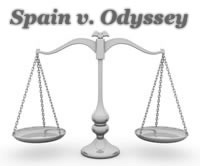 National Public Radio (NPR) had a segment Monday, May 19, discussing the legal battle between Spain and Odyssey Marine Exploration for the 17-tons of Colonial-era coins recovered from the ocean floor.

That legal dispute started back in May of 2007 when Odyssey discovered a 17th-century shipwreck, they code-named the “Black Swan”.

Spain filed legal claims contending the treasure is a part of their country’s cultural heritage and should be returned. Odyssey has said the treasure was found in international waters, and legally retrieved.

In the 4 minute NPR radio segment, Jim Goold, Spain’s attorney, contends that Odyssey’s recovery of the treasure was "immoral and illegal," and provided an analogy of someone taking personal effects from the pockets of those who died in the U.S.S Arizona at Pearl Harbor.

Odyssey’s Melinda MacConnel replied on the NPR program, in part, with:

"If the vessel related to the cargo that we have found is proven to be the (Nuestra Senora de las) Mercedes, since that ship sunk over 200 years ago, it is highly unlikely that we would ever find human remains.

And I suspect that their references to a grave site, etc., is made really to inflame the passion of the public."

Nuestra Senora de las Mercedes was a Spanish warship sunk in 1804, and the ship Spain believes carried the 17-ton coin treasure. Odyssey contends that possibility, but indicates there is not enough evidence to support any positive identification of the site — at least yet.

The NPR radio segment by Jerome Socolovsky is short, interesting and free. To listen to the story and hear further background information, as well as comments from Goold and MacConnel, follow: