Arizona, the Grand Canyon state, will launch their grand quarter into circulation starting with an official release ceremony on June 2, 2008. The public invited event will host Arizona Governor Janet Napolitano and United States Mint Director Ed Moy and includes several planned activities. There is also a special Coin Collectors Forum on the day prior. 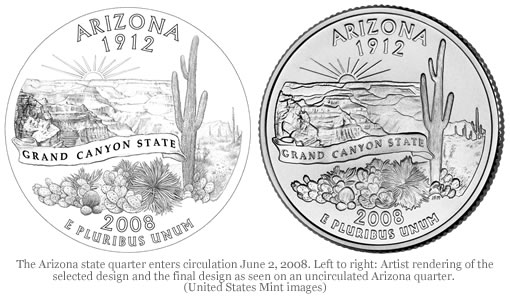 The Arizona commemorative quarter is the third for this year and the 48th quarter-dollar in the 50 State Quarters® Program set for release. Arizona was the 48th state to be admitted into the Union on February 14, 1912.

Governor Napolitano led members of the Arizona Quarter Commission in a ceremonial strike of the Arizona quarter at the United States Mint at Denver only days ago (May 16, 2008).

“This quarter will be a symbol of Arizona that people from across the United States and around the world can put in their pockets,” Governor Napolitano said.

“It displays two important images of Arizona and the American West – the Grand Canyon and Saguaro Cactus – inviting people to come and see the natural treasures our state has to offer.”

The official launch should stand out more, with kids 18 years and younger receiving a free quarter, and the public able to exchange their money for $10 uncirculated rolls of shiny, new Arizona quarters.

The Capitol Museum will also open featuring a new exhibit documenting the quarter from conception to circulation.

Arizonans helped the Governor select the final Arizona quarter design in May 2007 after more than 112,800 rankings were sent to the Governor’s Office.

The quarter depicts the Grand Canyon with a Saguaro Cactus in the foreground. A banner reading “Grand Canyon State” separates the two images. The coin also bears the inscriptions “Arizona” and “1912.”

There is both a coin collectors forum and the official quarter release ceremony.

On the eve of the launch, the public and news media also are invited to attend a free Coin Collectors Forum hosted by U.S. Mint Director Ed Moy. The forum is an opportunity to talk directly to Moy and learn about upcoming and potential coin changes.

Governor Janet Napolitano will be joined by U.S. Mint Director Ed Moy in the official quarter release ceremony. The event is free to the public and Arizona quarters will be handed out to children in attendance who are under 18.

Time: Monday, June 2, 2008. The event lasts from 9:30 a.m. – 12:00 p.m., with the official ceremony beginning at 10 a.m., and the Quarter Exchange immediately following (all Arizona Time). The Capitol Museum featuring a new exhibit documenting the quarter will also open.

After Arizona, Alaska and Hawaii are the final two state commemorative quarters. The Alaskan quarter enters circulation on August 25 and the Hawaiian quarter on a day yet to be determined in November.

What is one of these quarters appraised for or are there thousands around?