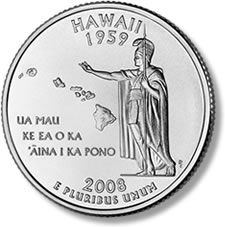 Hawaii state quarters officially enter circulation on Monday, but their ceremonial release kicks-off a week later, on Monday, November 10, the United States Mint announced. On the evening prior, Mint Director Ed Moy will also host a free Public Coin Forum where collectors and the media can ask questions and learn more about U.S. coins and future programs.

The Hawaii state quarter release marks the conclusion of the 50 State Quarters® Program, which has been described by the Mint as one of the most successful coin programs in U.S. history with an estimated 147 million Americans who collect the commemorative quarter-dollars.

The quarter design features King Kamehameha I stretching his hand toward the eight major Hawaiian Islands. Underneath the islands is the Hawaiian state motto "UA MAU KE EA O KA ‘AINA I KA PONO," meaning "The life of the land is perpetuated in righteousness."

Ceremonial quarter launches are always unique with state histories celebrated. After the ceremony, Director Moy and Governor Lingle will give new Hawaii quarters to children under 18. A keiki (children’s) hula performance and Hawaiian music will follow, and the public can exchange money for $10 rolls of Hawaii quarters.

The coin forum and the quarter release ceremony occur at the following locations and time:

The public and news media are invited to attend the free Coin Forum hosted by U.S. Mint Director Ed Moy.