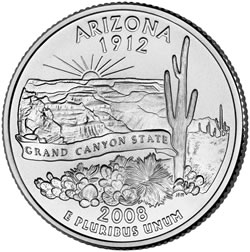 Arizona quarters were launched into circulation yesterday with the United States Mint release ceremony on the lawn of the state Capital in Phoenix.

The ceremony was full of local excitement with a Mariachi band playing, free mint ice-cream drumsticks and free Arizona quarters for everyone 18 and under. Earlier, United States Mint Director Ed Moy commented,

"Children make up a good portion of the 147 million Americans plugging the coins into their commemorative folios or folders. This has educated a whole generation of Americans in geography and history."

The Arizona state quarter is strikingly attractive with its Grand Canyon and saguaro cactus design theme. Over 4,200 quarter design suggestions from across the state were sent to the 24-member Arizona State Quarter Commission appointed by Governor Janet Napolitano.

From those, five designs rendered were created by United States Mint artists, and the final one selected as the template for some 500 million minted Arizona quarters.

"That’s why we think the Arizona state quarter will be one of the more popular ones, because of that natural-beauty factor. There is a whole segment of people who get excited about naturally occurring things that are unique to each state."

In a statement, he also commented,

“This quarter celebrates the breathtaking natural beauty of Arizona, from its rare Saguaro cactus to the awe-inspiring Grand Canyon,” Director Moy told the crowd.  “When Americans pull this coin out of their pockets, they’ll immediately think of Arizona.” 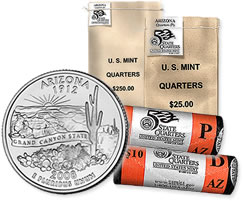 For coin collectors and those unwilling to wait for the quarters to make their way into banks and local stores, Arizona quarters may be purchased directly from the Mint.

The Mint is offering the Arizona quarters in:

The coins should be available for approximately 10 weeks. Each may be purchased through the Mint page:

The Alaska state quarter is next in line for release this year followed by Hawaii.