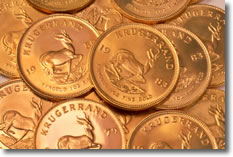 Imagine selling your home and the buyer comes to the closing toting a 30 pound briefcase containing $400,000 in South African gold Krugerrand coins. That’s exactly what happened in Sarasota, Florida.

In the residential purchase contract, the buyer and seller — both Americans — agreed to the gold transaction for a $1 million home.

“This was a first,” Ogilvie acknowledged, adding in Realtor fashion: “It really shows you the depth to which buyers will go to use their resources to acquire properties they think are well-priced.”

At of 11:27 am (ET), New York spot gold per ounce is $926.30. That would take 432 Krugerrands to make the $400,000 today. Two weeks ago it would have taken about 460 of the coins. Given gold’s recent volatility, the purchase contract must have been almost as unique as the coins for payment.

As a side note, the HeraldTribune article indicated about 444 coins were needed during the time of the home closing, and that the weight of those coins were about 37 pounds.

Krugerrands are weighed in troy ounces, not the everyday weight system of the avoirdupois pound used when stepping on a scale. 444 Krugerrands actually weigh 37 troy pounds, but their "lifting weight" is about 30.4 pounds (lbs).

Gold is legal tender you can buy house with Krugerrand or Gold Eagle Coins. Since dollar is weak people stop accepting U.S. Dollar in payment for good and service.

Well, it looks like this seller made a hell of deal for himself given the move in gold prices!