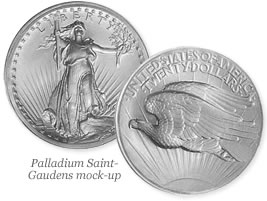 On May 15, the House of Representatives passed H.R. 5614, an act “To authorize the production in palladium of Saint-Gaudens Double Eagle coins as ultra-high relief numismatic coins and bullion investment coins in order to provide affordable opportunities for investments in precious metals, and for other purposes.”

Palladium is a silver-white precious metal that is directly above platinum and to the left of silver in the Periodic Table of Elements. Generally speaking, the price of palladium is half that of gold.

The template for the coins is that of the 1907 ultra-high relief Augustus Saint-Gaudens $20 Double Eagle, considered by many to be one of the most beautiful gold coins made in the history of U.S. coinage. The Treasury authorized issuance of a one-ounce gold version of this coin in 2009.

The passage of the bill occurred without public contention and with full bipartisan support — voting by roll call for H.R. 5614 were 225 Democrats and 188 Republicans. An easy majority with only 18 House members not voting. In short, a unanimous decision.

Before the bill becomes law, it must go through the Senate and then get signed by the President. In late April, an identical Senate bill, S. 2924 was introduced by Sen. Max Baucus [D-MT] and Sen. Jon Tester [D-MT]. S. 2924 is in the normal beginning stage for new bills and was referred to the Senate Banking, Housing, and Urban Affairs.

Although predicting the passage of coin legislation is just that — a prediction — the legislation appears to be more thought than most and enjoys strong bipartisan support. It seems likely to become law at some point.

Many collectors will find the prospect for these new coins exciting, but residents and legislators of Montana will no doubt feel a touch more pride in their production. And for good reason.

Both the House and Senate bills require the use of "palladium mined from natural deposits in the United States…" Montana has the nation’s only palladium mine, Stillwater Mining Company.

What could be better for collectors? Given the recent prices of gold and platinum coins, more coins — not just the potential Saint-Gaudens’ — made from palladium.

Blasphemy! I am outraged the government would allow the reissue of a classic GOLD coin in PALLADIUM. Ack! What are they thinking!?

A new palladium issue should be designed by a new artist. There are plenty of creative artists out there who would love the opportunity to create the USA’s next masterpiece. Look to the future people!

I think having palladium coins is an excellent idea, and long overdue.

I must admit to having mixed feelings too in recreating the old Saint-Gaudens coins. There’s no doubt they will be beautiful coins when minted and also bear slight changes from the original design, but what about our artists of today and that next masterpiece?

A problem may that a directive for a “new” bullion coin could have huge political obstacles.

Wow this is exciting news!!!
I now can buy them from the good ole USA not from Canada.
this is a great decision by the government.