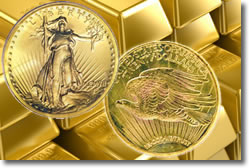 The United States Mint peaked curiosity further for the ANA World’s Fair of Money® convention by announcing their unveiling of the 2009 Saint-Gaudens double eagle designed gold coin and adding a display of six real gold bars that were refined at West Point.

The Mint previously announced they would show the modern $20 gold coin, but the latest announcement adds that their exhibit will:

For sure, an extra element of interest is added to the much awaited revelation of the 2009 Ultra High Relief, which is a modern version of the 1907 Augustus Saint-Gaudens $20 Double Eagle often described as the most beautiful gold piece ever made.

Weighing in at 27.5 pounds each with 400 ounces of gold, the six gold bars for the exhibit are worth about $2.3 million dollars based on yesterday’s London gold closing of $959.75 an ounce.

By melting these bars, 2,400 of the 2009 gold coins could be minted. Each would contain an ounce of pure gold, have a diameter of 27 millimeters, and be about 50 percent thicker than other U.S. one-ounce gold coins.

The double eagles will not be available for purchase at the convention, although collectors will be able to touch an ultra high relief on a plaster of the coin. They will be available early next year and minted only in 2009. (If the U.S. Senate passes H.R. 5614, expect palladium versions to continue in 2010.)