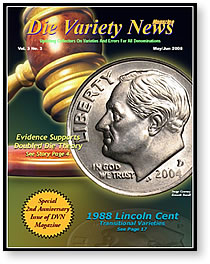 The magazine’s May/June issue #13 sports, as its title suggests, a variety of interesting coin topics that are sure to please the collector. The numerous descriptive photos within the magazine are great in teaching new collectors about various coin die varieties while keeping experienced collectors well informed.

The magazine has started its third successful year in publication. This latest issue continues its tradition of top die variety news, including subjects on:

In addition to the main article topics, the magazine includes its popular sections, “This & That” section, “World Varieties,” “Mint Error Showcase” and the “Variety Spotlight.“

With the assortment of quality articles and descriptive photos, you will no doubt find Die Variety News a delight.

Because the 58-page magazine is heavy in content and photos, you may wish to download it directly to your computer. The magazine is published in the Adobe Acrobat© PDF format, making it a breeze to save directly to your desktop. Not only can you jump around the magazine’s pages faster this way while viewing, you can enjoy it later at your convenience or even offline.

Past issues of Die Variety News

You may also be interested in ordering past issues. Mr. Crawford offers all issues on CD for the price of $20, including shipping and handling. According to the Die Variety News home page, back issues include:

Other works by Billy G. Crawford

Billy G. Crawford is also the author of “A Detailed Analysis of Lincoln Cent Varieties” and co-author of “The Authoritative Reference on Eisenhower Dollars” with John A. Wexler and Kevin Flynn.