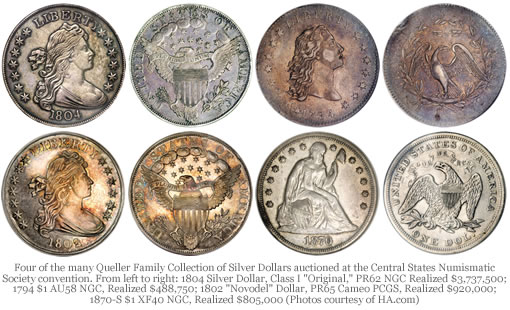 More than 6,700 bidders participated in the Signature and Platinum Night events, and another 3,000-plus are anticipated to participate in the Final Sessions. The auctions were held in Rosemont, Illinois on April 16-18; Images, descriptions, and prices realized for all lots can be viewed at the Heritage website, HA.com.

“Heritage was very pleased with the auction wide results at Central States,” commented Heritage President Greg Rohan, “and especially so for the results of the wonderful Queller Family Collection. As anticipated, the market reacted well to the combination of rarity and quality that marked all of the coins assembled by a discerning eye. And also as anticipated, the most valuable three coins sold in Rosemont were all Queller coins. The prices further support claims that this was the greatest silver dollar collection ever assembled.”

“Heritage was also pleased at the total prices realized including currency. Over the past three years, Heritage achieved enviable results at our Central States auctions: 2005 – $24,265,967; 2006 – $24,145,105; and 2007 – $24,912,768. Frankly, we were beginning to wonder when we were going to exceed that $25 million level! Well, we have decisively smashed that barrier in 2008, and any concerns about the overall economy were decisively rejected by astute collectors willing to pursue quality.”

In the Mint Act of April 2, 1792, Congress established a bimetallic coinage system based on the silver dollar and the gold eagle as the “unit” measurement. All 1,758 dollars dated 1794 coins were minted from a single pair of dies.

In 1980, this coin was described as “the finest Uncirculated 1855 Seated Liberty dollar that we have seen” and the certification services agree; it is still the single finest known!

The rarity and importance of the 1870-S Seated dollar is rooted in the building of the San Francisco Mint and the laying of its cornerstone on May 25, 1870.

A magnificent specimen of this rare proof date, among the rarest in the series.

This is the finer of only two NGC-certified examples, partly lustrous, delicately toned in caramel-gold and powder-blue.

A classic numismatic rarity, with only about a dozen known in all grades. It is thought that just 20 proofs were coined to mark the initial operation of the New Orleans Mint early in 1839, from one of the two die pairs received in New Orleans. This example has a wonderful pedigree for the last half century.

From The Yoder Family Collection, Part One.

In this unusual die alignment, the center of Liberty’s head is opposite the right side of the F in OF. Ex: Norweb III (Bowers and Merena, 11/1988), lot 3776, where it was photographed in Die Alignment I or II orientation.

The Kaufman 1839 proof Seated quarter is considered the only one of its kind in existence, and is the solitary example certified by either NGC or PCGS. It had been off the market for a decade, and before that for half a century. Ex: F.C.C. Boyd; World’s Greatest Collection (Numismatic Gallery, 3/1945), lot 147; Numismatic Gallery (privately, 7/1947); John Jay Pittman, lot 1298; Phil Kaufman Collection.

The Kaufman 1839 No Drapery proof half dollar is one of only three pieces known, with a provenance to F.C.C. Boyd and the World’s Greatest Collection. It appears to be the only late die state example, with a bisecting reverse crack that is unseen on the other two examples. While not designated a Cameo on the NGC holder, deeply mirrored fields highlight the frosty devices.

This is the solitary example certified by either NGC or PCGS; this defines rarity. This was the second 1839 dated rarity that Phil Kaufman had purchased out of the John Jay Pittman collection. The early history of this example is uncertain, and it may be a unique issue. From The Phil Kaufman Collection of Early Seated Proof Sets, Part Three.

The Phil Kaufman 1842 Small Date proof quarter is one of only seven known pieces, two of which are permanently impounded in the cabinets of the American Numismatic Society and the Smithsonian Institution. While many Large Date quarters exist in circulated and Mint State grades, the Small Date variety is a proof-only issue.

This is a fabulous coin, and the finest known of perhaps seven examples; it was a favorite of Phil Kaufman because of its flawless fields and extraordinarily beautiful original toning. NGC has certified just three PR67 Seated dollars dated from 1840 to 1855, and all three were part of the Kaufman Collection, so he may be considered the reigning expert on high-grade beauties.

This is the finest of the 45 coins certified by NGC and PCGS, and one of just eight pieces given a Cameo designation. The Restrike silver dollars are sometimes referred to as the “Centered Date” dollars, compared to the higher date position on the Original strikes. It is generally thought that all 1851 Restrike dollars were coined as proofs in the late 1850s. From The Phil Kaufman Collection of Early Seated Proof Sets, Part Three.

This remarkable coin is tied for the finest known business strike of the BD-7 variety.

During the 1820s, the face value of gold coins was less than the value of gold they contained, meaning that few were struck, and most were melted soon after. Only one coin has been certified finer.

This is the finest certified Cameo Proof 1868 Type Two Twenty, and is a coin of the utmost rarity and importance, whether to type collectors, date collectors, or to connoisseurs of proof gold.

This rarity, ex: Morse Collection, is among the finest certified at either service.