Dallas, TX. The catalog for the Official Auction of the Central States Numismatic Society convention, being held in Rosemont, Illinois on April 16-18, is now posted by Heritage Auction Galleries on their HA.com website. Both the Signature and Platinum Night catalogs have been posted, as well as a significant Currency Auction. 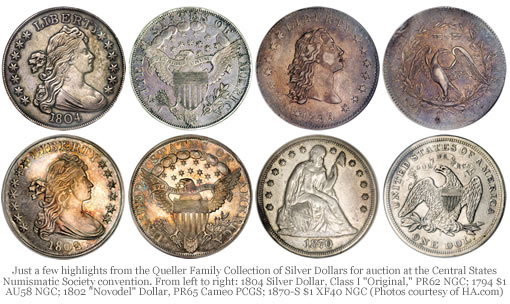 “Heritage is presenting incredibly strong coin and currency auctions at Central States,” commented Heritage President Greg Rohan, “and the Queller Family Collection of Silver Dollars, 1794-1935 is the star. Only a very select few numismatists are ever lucky enough to actually own the singularly important 1804 dollar, and David Queller added to that his 1794 $1 (AU58 NGC); 1802 $1 (PR65 Cameo PCGS); 1870-S $1 (XF40 NGC); and 1853 $1 Restrike (PR65 NGC). Considering the quality, completeness, rarities, and pedigrees, it is no wonder that this has been called the greatest silver dollar collection ever assembled.”

“In addition to the Queller Collection,” continued Rohan, “We have tens of millions of dollars of numismatic rarities available from more than 400 consignors. This has the promise to be the largest Central States auction that Heritage has ever presented. I will mention the wide range of rarities included, from Colonial through Double Eagles. This is a catalog that literally contains something for every collector!”

In the Mint Act of April 2, 1792, Congress established a bimetallic coinage system based on the silver dollar and the gold eagle as the “unit” measurement. All 1,758 dollars dated 1794 coins were minted from a single pair of dies.

The rarity and importance of the 1870-S Seated dollar is rooted in the building of the San Francisco Mint and the laying of its cornerstone on May 25, 1870.

A magnificent specimen of this rare proof date, among the rarest in the series.

This is the finer of only two NGC-certified examples, partly lustrous, delicately toned in caramel-gold and powder-blue.

The Mint Act of April 2, 1792, established a Mint at Philadelphia (the nation’s capital at the time), mandated a decimal coinage system, set the silver:gold ratio at 15:1, and prescribed a silver fineness standard for coinage in the awkward ratio of 1485/1664, or 0.8924+. This is a problem-free example of our nation’s first circulating coinage.

Although this coin was previously unknown and unrecorded, it “carries its own credentials,” and is likely a unique product from the New Orleans Mint.

In this unusual die alignment, the center of Liberty’s head is opposite the right side of the F in OF. Ex: Norweb III (Bowers and Merena, 11/1988), lot 3776, where it was photographed in Die Alignment I or II orientation.

This superlative low-mintage dollar came out of the collections of Norweb and Jack Lee II, two pedigrees that equate to quality, and this is the only MS67 certified by NGC. Ex: Norweb III (Bowers and Merena, 11/1988), lot 3887, where it brought $357,500, a record for any Morgan dollar at that time; David Carter and George Bodway; PCGS Tour Coin, 1990 and 1991; Jack Lee II.

America’s $4 denomination is historically rooted in the desire for an international coin of exchange, with the movement led by the Honorable John Adam Kasson (1822-1910), a U.S. politician.

The 1795 half eagles were the first gold coins struck at the Philadelphia Mint, from dies prepared by Robert Scot, and this is the finest certified of the variety.

This remarkable coin is tied for the finest known business strike of the BD-7 variety.

During the 1820s, the face value of gold coins was less than the value of gold they contained, meaning that few were struck, and most were melted soon after. Only one coin has been certified finer.

This beautiful coin is tangible evidence that the U.S. Mint, at the end of the 19th century, could produce proof coinage of quality comparable to that of modern issues – and then this coin had the good luck to survive in nearly perfect condition for over 100 years!

This stunning gem half eagle is the finest graded, and may well be the finest known.

This is the finest certified Cameo Proof 1868 Type Two Twenty, and is a coin of the utmost rarity and importance, whether to type collectors, date collectors, or to connoisseurs of proof gold.

A Saint-Gaudens double eagle series specialist understands the absolute and conditional rarity of this elusive issue.

This rarity, ex: Morse Collection, is among the finest certified at either service.