DALLAS, TX – At the end Heritage Auction Galleries’ Central States Numismatic Society Convention Platinum Night Auction on Thursday, April 30, the Adams-Carter specimen of the Class III AU 58 PCGS 1804 silver dollar lived up to its billing as "The King of Coins" when Bedminister, NJ collector John Albanese topped all others with a $2.3 million bid, including the 15% Buyer’s Premium. The total for the Heritage CSNS Auctions is currently at approximately $45 million with post-auction buys continuing at www.HA.com. 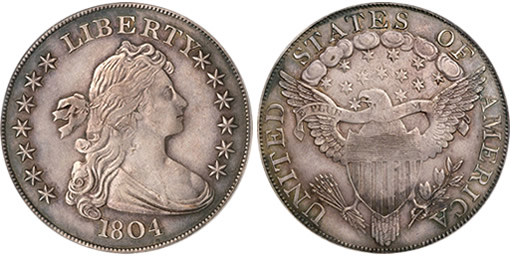 "There was never any question of whether it was going to be the top lot in the auction," said Greg Rohan, President of Heritage. "Whenever you have an example of the most famous coin in the world it’s going to be a big night.

In this case, at $2.3 million, it set a new world record for its class. Thursday night’s price made this particular 1804 dollar the seventh most valuable coin ever sold at auction."

The Class III 1804 $1 received widespread coverage in the mainstream media in the days leading up to the auction, and the buzz in auction gallery was equal to the advance publicity.

As coin collectors and curious onlookers alike watched the auction live in Cincinnati and on HERITAGE Live!, the company’s real-time proprietary online bidding platform, there was a collective hush as the coin climbed past $2,000,000 and spontaneous applause when this most famous of coins finally found its new owner.

While the Adams-Carter 1804 $1 grabbed the headlines, the overall success of both the rare coins and the rare currency auctions is the hidden story in the whole night.

"The total prices realized in these auctions speaks to the continued strength of the rare coin market when there are precious few places with such fortitude," said Rohan. "Even if you take out the $2.3 million on the 1804 $1, you still have an almost $42 million auction; by any standards that’s a good return."

Several other rare and pristine coins garnered their share of the overall value of the auction with six figure prices. Following are a few highlights:

Sixth Finest Known 1794 Dollar, B-1, BB-1, MS61 NGC, Ex: Murdoch, Bass Specimen: Only a small number of 1794 dollars are known today with strong definition on the left portion of each side and this is such a coin. Listed as Specimen Number 6 on the Condition Census as compiled by Martin Logies in The Flowing Hair Silver Dollars of 1794.

1876-CC Twenty Cent Piece, a celebrated foundational rarity, MS66 PCGS, tied for finest certified: The 1875 introduction of the twenty cent denomination was a direct outgrowth of the increasing power of Western silver-mining interests and the "Crime of ’73," the Mint Act of 1873 that among other things demonetized the silver dollar and eliminated the half dime. The total surviving population is estimated at 16 to 18 pieces.

1794 B-1, BB-1 Silver Dollar, AU55 NGC, Continuous Provenance Dating to 1864: The McCoy Collection Specimen, with a continuous provenance dating back to 1864, this piece is one of the most historic 1794 silver dollars among the 135 or so pieces currently known, of which this coin is considered the 10th finest.

1795 Flowing Hair Dollar, MS65 NGC, B-1, BB-21: One of the finest known of this date and type and a remarkable coin that any numismatist will appreciate for the lustrous fields and exceptional surfaces. There are no disturbing adjustment marks or nicks worthy of note, and it is simply amazing that any Flowing Hair silver dollar could still look this nice after 214 years.

1795 B-15, BB-52 Dollar, MS65 PCGS: From the Cardinal Collection. There are two varieties known for the 1795 Draped Bust silver dollars, known as the Off-Center Bust (B-14) and the Centered Bust (B-15). Most numismatists believe that the B-14 dollar was struck first, followed by the B-15, which is what this example is. A masterpiece of the coiner’s art!

The Single Finest Certified 1919-D Walking Liberty Half, MS66 PCGS: Among half dollars coined in the 20th century, the 1919 issues remain as some of the (conditionally) rarest. The Denver facility produced just 1.1 million coins; most of them were subsequently well worn from years in the channels of commerce, and during the Great Depression preceding the next World War. It is generally accepted among enthusiasts that the 1919-D is the rarest Walking Liberty half dollar at the fully struck Gem level of preservation. This example is the single finest certified 1919-D half dollar.

1918/7-D Buffalo Nickel, MS65 PCGS tied for Finest Certified, Historic Overdate: A diligent search of auction records reveals just four appearances of this issue in Gem condition during the past 15 years. Heritage was privileged to handle the coins in two of these appearances, one in the Central States Signature Sale (April 2002) and another in our Exclusively Internet Auction Sale (May 2001). The high technical grade, intense aesthetic appeal, and fascinating history of this coin combine to make this offering one of the most desirable examples of 20th century coinage.

The Finest Known 1796 JR-4 Dime, MS67 NGC: Easily the finest known JR-4, although a few other Gem specimens are close to this example in quality. Plated in Goldberg’s September 2003 sale and in Stack’s sale of the James A. Stack Collection.

On the rare currency side of the CSNS auctions, paper money continued to show good prices and strong demand, especially where high value Federal Reserve Notes were concerned. Chief among those vying for the best rare currency notes in Cincinnati was a Serial Number 99 Boston $10,000 Note, Fr. 2231-A 1934, PCGS Choice About New 58, which realized $86,250.

For more information on prices realized in this auction, to read detailed lot descriptions and download full-color hi-resolution images, go online to www.HA.com/CSNS.